Prometheus opens with great promise delivered on a grand scale. It is a quest to find the origins of life on earth, a journey to meet our makers. I had entered the theater primed with expectation (the promos for this film were brilliant), and upon learning where the story would take us, I smiled and settled into my seat. Seriously, I couldn’t wait to see what new directions Ridley Scott might take with this wonderful theme.

Sadly, the answer was right into the ground.

Because the big crash of a spaceship at the end of this flick was the perfect metaphor for the movie as a whole. It was just one big space-ship wreck.

…complete with main characters running directly away from the rolling wheel-like space ship instead of jumping to the side. Yes, they actually did that. Seriously, how does a movie studio spend so many millions of dollars on special effects and star power only to miss the fact that they put a Loony Tunes gag in the middle of the dramatic climax of the story? Or do they just think we are that stupid?

Maybe we are. …Damn!

Don’t get me wrong. I like really cool special effects as much as the next guy. But I also like an interesting story. Is it really too much to ask that they appear in the same film? 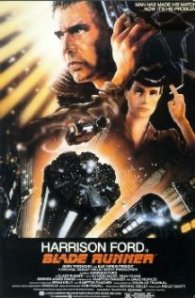 Blade Runner was a classic Philip K. Dick story. Few authors could make something so fantastic speak to people in such personal ways, and Ridley Scott transmitted that to the screen brilliantly. Do you remember Roy’s encounter with his maker? Do you remember watching as this replicant interrogates his very creator, trying desperately to wheedle extra time out of the very man who had chosen to the hour of Roy’s demise? And do you remember how easily the story acquired its deeper significance, that moment when a simple plot point about a creature trying to extend its life acquired philosophical significance?

For all his artificial nature, Roy stood before his maker asking questions about the very meaning of mortality. They were questions we could all recognize. Questions that touched deeply on what it means to be human, what it means to live for only a little while.

And in that moment when the character of Roy stands before his maker and demands to know the reason for his imminent death, he became so very human.

…still more so in the moment of his passing:

What makes Roy’s story so compelling is not merely that we can see the metaphor, but that the metaphor is used to tell us something about our own humanity. It is not merely the loss of personal life that Roy mourns. It is also the passing of his experiences into oblivion, experiences that could be of real value to someone. He is a remarkable character, to be sure, and the world will lose something as he passes.

…just as it does with the passing of each of our loved ones.

…just as it will for each and every one of us.

Roy meets his maker to confront his own mortality, and he takes us along for the ride. We are there, not just to witness the action, but to share in the meaning of that encounter. …perhaps even to share in the crime of deicide when Roy executes his own verdict on his maker.

And what of Prometheus? 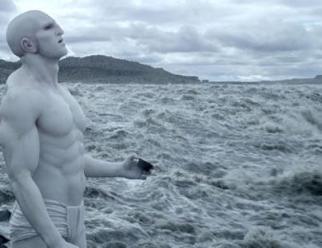 As Roger Ebert tells us, Prometheus raises questions about the origin of human life, presenting us with a version of the panspermia hypothesis in which all of life on earth is begun through the apparent suicide of a pale muscular alien. In the opening scenes that alien appears alone on a barren plant, his spaceship leaving without him. With all the solemnity of a priest performing a great ritual, the alien consumes a mysterious substance, and it ravishes his body. As the mysterious alien falls into a rushing river, his body disintegrates, releasing the seeds of life into a new world.

Was this earth, as Roger Ebert suggests? Ridley Scott tells us that it could be any planet, but of course the point of the scene is to raise the possibility. This might have been how life on earth started, so we are asked to believe. More to the point, it may well be how life on planet earth will begin anew, if the “engineers” as these aliens are called, should choose to return.

This SHOULD have been a brilliant movie. What makes it so sad is the inattention to narrative detail. The scientists do not act like scientists, especially the geologist who’s rabid anti-intellectualism belies his choice of career. Seriously, didn’t someone on set know that geology is a science? But of course this is a side character, and his flaws are forgivable. What of the main characters?

Three people drive the quest to find the engineers in Prometheus. Two archaeologists, Elizabeth Shaw and Charlie Holloway (played by Noomi Rapace and Logan Marshall Green) initiate the quest to find the engineers as a result of the result of their own findings. Holloway is so intent on speaking with the engineers that he engages in reckless actions upon landing. Believing the engineers to be dead, he drowns his sorrows in a bottle. I suppose we are meant to appreciate the irony of a scholar lamenting the greatest archeological find in the history of the field, but I for one could not get past the absurdity of it. Shaw could almost have served as a voice of reason were it not for her complete irrelevance in the lead-up to the final conflict. No-one listens to her (least of all her husband and partner Holloway), right up until she ends up as the sole human survivor of the expedition.

…which is to say that no-one ever listens to her.

And then of course there is Peter Weyland (played by Guy Pearce). A wealthy old man facing the end of his own life, Weyland funds the expedition for the sole purpose of extending his life. How he came to the conclusion that the engineers would extend his life is beyond me? I think it was beyond the writers themselves? Whatever its origins, Weyland holds onto this assumption despite all evidence to the contrary. Long after it has been made clear that the engineers bear no goodwill towards their creation, Weyland chooses to speak with one of them. It was a foolish mistake.

…and it was his last one.

And here we have the crux of the problem.This movie doesn’t really raise any questions about the origins of life at all. The prospect that life on earth might have its origins in the stars is simply a premise designed to kick-start the action. Nothing about the unfolding action sheds any light on the significance of that premise, nor does it begin share that significance with anyone in the audience.

The central meaning of the encounter with the engineers rests on the irrational presuppositions of Holloway, Shaw, and Weyland. Each of them has loaded the event with significance particular to their own stories, their reasons for doing so barely explored in the course of the film. This sort of approach might have worked with some earnest character development, but Prometheus was too busy wowing us with majestic visuals and sudden moments of terror. In the end, this film attaches no genuine meaning to the event at all.

And so the encounter with the makers of humanity does not quite resonate the way it could have. The encounter with the engineers is an intrinsically interesting moment, one spoiled terribly by the lack of a meaningful storyline to carry us through it. Unlike Roy, these characters bring no great questions to their creator; seeking instead to learn whatever he chooses tell them. But he tells them nothing, electing instead to begin smashing up its creation.

…which actually sums up this movie pretty well.

I have to thank my friend Michael Kucan for helping me to remember some of the more irritating details of this movie. I would also like to recommend aknittysociety blog, which contains a wonderful analysis of race and gender in Prometheus. I should also say that in my thoughts about Blade Runner were rather strongly influenced by entry in Roger Ebert’s Journal, I Remember You.

16 thoughts on “Meeting Your Maker in a Ridley Scott Movie: Once Again As Farce (Spoilers)”