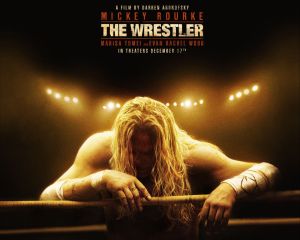 So, I finally watched “The Wrestler,” and I almost liked it.

I find myself wondering, at what point does failure to resolve a conflict amount to the same thing as letting the hand of God resolve it for you. The movie goes well out of its way to show us that this character has depth, that he has feelings, that the bits and pieces of his broken life matter to him in deeply personal ways.

All of which just makes the final ending such a disappointment.

The way I read it anyway, the central problem is what is he going to do with his life now that wrestling is over. Sadly, the final answer appears to be “pretend that it isn’t.” The move is tantamount to suicide, of course, but that is beside the point. It really doesn’t matter if we imagine the main character dying two minutes after the closing credits or surviving the match, even somehow doing another one. The bottom line is that this solution doesn’t work unless we ignore the very premise which led to it, namely that his heart won’t allow him to wrestle.

Of course the main character has his reasons which he delivers in a compelling speech to the love interest he is turning his back on to go wrestle, but that is the main problem. This guy can’t find any other way to proceed with his life than to go back in the ring? I think the writers believed in this character less than they wanted the audience to. In the end, they could not let him be anything but a meat-head. And all the rest goes out the window with that decision.

He took the easy way out.

So, did the people who made this movie.