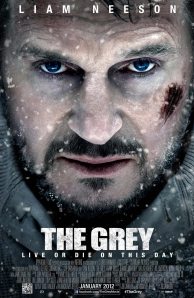 In The Grey, Liam Neeson along with a small cast of characters survive a plane crash in remote parts of Alaska. The crash is, well, …the first of their challenges.

I saw this movie in a theater in Anchorage. I had just come off a flight very much like the one portrayed in the film, and I was killing time during the layover before a second round of middle-seat torment, when someone suggested watching this movie. It sounded like a good way to kill some time.

The problem I have with this movie is the story itself. The damned plot reminded me of chalk boards at nearly every turn.

Chalk boards and fingernails that is.

We could start with its portrayal the sort of people who work in the oil fields of Alaska. Neeson’s character, John Ottway tells us early on that he is a hired killer of sorts, working in the oil fields of Alaska. He then goes on to describe the oil-field workers as a mindless, hard-drinking and violent lot, prone to criminal actions. There is little in the opening scenes to suggest that Ottway’s comments are intended as anything less than the truth, at least as this movie envisions it.

Having shared an airplane with workers from Prudhoe Bay several times, I couldn’t help but cringe. I kept thinking about a long discussion I had on one flight with mechanic headed home to Texas. He spoke with me about his faith in the Baha’i church and a range of experiences working in different parts of the world. Did this movie do him justice? Not by a long shot, nor I suspect did it do justice for the rest of the workers at these fields.

Mind you, I am happy to go with a bit of slanderous fiction if we can then get along with a plausible storyline. I could just accept the movie’s take as a given and put it behind me. I could.

But let’s just return to the, “hired killer” theme. Who or what does Ottway kill?

Yes, Ottway kills wolves for a living, as is established in an early scene when we see him bring a lone wolf down with one well-placed shot, just in the nick of time. This would be a lone wolf that moved from stalking to charging multiple oil workers. The movie offers no explanation for the conduct of this wolf, giving the impression that this sort of thing is par for the course.

The Grey does give us a moving little moment where Ottway lays his hand reassuringly on the wolf as it dies. (Yes, that’s right, he touched the dying wolf as it died. …cause that’s what you do with a wounded and dying wolf. …Yep.)

And I should add that this scene is one of the more realistic moments in the films lupine antics. To say that the wolves of this film do not much act like the real thing is putting it mildly, unless of course you mean the Dire Wolves from Dungeons and Dragons. These wolves are smarter, meaner, more persistent, and just generally more bad-ass than any wolves in the known world, …Tolkein novels and role-playing games aside, I mean. Yes, I do think this movie depicts the Dire Wolves of D&D quite accurately.

Which is of course the major basis for the plot. First the plane crashes, and then a pack of Dire Wolves hunts the survivors for the rest of the movie, picking them off one by one.

If you’ve read my blog, you probably think I rooted for the wolves throughout the movie.

The trouble is that for all their extraordinary powers, these magical wolves take an awful long time to finish off their human quarry. And just when I was getting to the point where I thought the last bunch off heroes might actually make it (or perish in one merciful slaughter), the movie finds a new tone of nails-on-chalkboard resonance to strike. You see, it wasn’t enough to hit me with condescending portrayals of oil workers pit up against magical uber-wolves from fantasy land. No, this movie had one more means of tormenting yours truly.

It found my true weakness.

With but three survivors left, one of them finally gives up. The character, John Diaz, a particularly rough and tumble fellow decides he simply cannot go on. Now this might seem plausible, because of course he is hungry, cold, and tired at this point (much as I was sitting in that theater in Anchorage), but that would be far too predictable an excuse to lay down and die. No, it turns out that Diaz, the problem child of survivor group, has finally seen the error of his. He realizes how beautiful the countryside is, and realizes that the rest of his miserable life has been wasted all along. So, Diaz tells the other two to go on. And Ottway? Ottway understands and accepts this decision. This really belongs in an Iron John book. They leave Diaz sitting by a rover waiting for the wolves to get him, but not before some very meaningful moments of male-bonding occur.

At this point of the movie, I think I was genuinely squirming in my seat. In fact I am squirming now, just thinking of it.

So, I will just take a moment to mention some of the more interesting features of the movie. Ottway has a number of flashbacks during the course of the movie, consistently returning to a past relationship with a beautiful woman. These moments do serve to set up an interesting aspect of the film narrative; it is the reason he now works in the oil fields, and it is the source of his outlook and (ironically) his leadership qualities. Sadly, this theme never develops into its full potential.

I should also say that there is a drowning scene in this movie that is quite well done, a bit reminiscent of an old Paul Newman film, Sometimes a Great Notion. What makes it so interesting. Well you will have to brave the wolves to find out, because I’m not going to give this one away.

Well that’s it. I could go on, but, …no, I can’t. The memory of this movie is too much for me. I really don’t feel well at all right now. I look outside my window at the beautiful Alaskan scenery, and I realize that I just cannot go back to this movie review. You my dear reader should go on without me. Maybe you can make safely it to the next blog on your own. Just click the link to the Bill Hess Blog and you’ll be safe.

I’ll just sit here and let the chalkboard-sounds and the wolves get me.