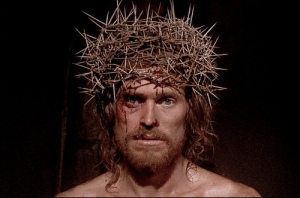 Can you see it my Brothers?

Can you see the truth of what I am saying?

Because not everyone can see this. Some consider the topic just too boring to bother with. They’d rather watch a slasher flick. Others are too busy with their prayers. Jesus is too beautiful to them, too noble, too good, too strong, too gentle, too much of a blank check upon the bank account of all things warm and wonderful.

They cannot see it. But Jesus can be downright terrifying.

The Prince of Peace makes an awesome movie villain.

Just ask the merchants in the temple! Yes, that would be the one Jesus trashed, because apparently commerce is supposed to be a bad thing. Just a temper tantrum, you say? Well tell that to someone whose entire livelihood has just been trashed by a madman. A madman who threatens to destroy the very temple of God Himself.

And I ask you, what sort of dark kingdom begins with the abandonment of one’s own family?

Let us not even mention the practice of necromancy! Well, okay, yes, let’s go there. Do not imagine that little girl was the only time this fisher of men came to practice the dark arts. On this matter (and many others), the dear Lord is definitely a repeat offender. Seriously, when in the Hell does someone raise the dead and NOT end up as the principle villain of the story? Oh I’m not talking about accidentally awakening a Mummy. That gets you an hour of running and a hero status when you finally beat the bad guy back into the ground. No, I am talking about the deliberate act of pulling a dead man out of the grave and setting him back to walking about the earth. And Jesus did it at least twice!

There is a reason the name of Frankenstein fills us with terror, but Jesus gets a free pass on this one, does he?

And then of course of course there is his skillful use and disposal of Judas. Even as the man betrays Jesus with a kiss, Jesus himself has willed the whole thing to happen, …from the moment of creation, so some folks say. And thus does Judas play into the great cosmic scheme, a lamb for the sins of man. But who is the real sacrifice here? And how wicked is the villain that has chosen a single man for the greatest crime of all history? How wicked is the puppet-master who could bring his chosen victim to accept eternal damnation …with a kiss?

How did he do it? Well great movie villains work in mysterious ways.

Not even the Cylons of the new Battlestar Gallactica series could manipulate humans with such ease and skill. Neither Darth Vader, nor Sauron, nor Scorpius from Farscape have ever had such an elusive evil plan! Professor Moriarty could only dream of such eloquence. Christopher Walken was never so creepy in all his career! And the Devil in all his movie incarnations has never, NEVER, been so menacing.

The question you have to ask is just why everyone found this fellow so frightening to begin with? Why is that this Jesus must die?

The Romans, The Pharisees, even apparently the average man on the street came to call for the blood of the lamb.

So we are told anyway!

But were they really so short-sighted, so bloodthirsty as to want the death of a miracle worker and healer? Or did they know something the rest of us seem to have forgotten? Did they see into the depths of the darkness? Did they know just how terrible this villain really was?

It’s a damn good question, I tell you.

Note: The original version of this post included a lot of links to various movies. I really was talking about Jesus as a movie character and using the videos to illustrate the point. Anyway, dead links happen. So, I took most of them down. Left up Judas, cause, yeah.