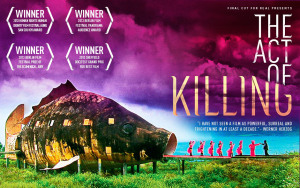 Yapto Soerjosoemarno is a middle-aged man. He is the leader of Pankasila, an Indonesian youth group three million strong. The camera follows him out onto a golf course where he explains; “Gangsters are free men. They want to live life in their style. Relax and Rolex.” A moment later he tells his young caddy she has a mole on her pussy.

Of course all of this comes after Yapto explains that Pankasila had killed all the communists in Indonesia. It comes after he has spoken at a Pankasila rally, one in which he calls himself the biggest gangster of all.

What else could the young girl do but smile?

As he and his friends try on colorful gangster outfits, Anwar Kongo waxes on about his inspirations; Al Pacino, John Wayne, and others like them. He goes on to relate the story of how he once placed the leg of a table on a man’s throat before he and others sat on the table and bounced up and down, “having fun!” Those present place a bag of clothing under the table-leg and re-enact the scene, singing and smiling as they do.

Eventually, they declare the bag dead.

…these are just some of the opening scenes in The Act of Killing. This film doesn’t contain much graphic violence, but the significance of the violence does show is compounded rather heavily by the knowledge that it is in some sense real, that those in front of the camera are acting out real murders they themselves committed decades in the past. 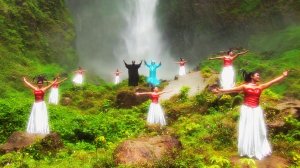 The Act of Killing explores a wave violence occurring in the wake of a military coup in Indonesia. The coup happened in 1865, and most of the killing occurred within the next few years, but those who carried it out have been living in freedom ever since. Their friends and neighbors have (it would seem) been living in fear all this time, a point driven home quite clearly when the cameras follow several thugs into a market to shakedown Chinese merchants.

What makes this movie so remarkable is of course its unique approach to the subject. When filming the survivors of this bloody era proved too dangerous for them, and when the perpetrators proved all-to-willing to explain everything, Film-maker Joshua Oppenheimer, elected to focus on the killers. Finding his subjects kept imagining their actions in cinematic terms, he finally invited some of them to direct scenes of their own killings, and to stage them in the manner of their own choosing.

The resulting scenes are terrible in more ways than I can count. These aren’t professional actors; they are really killers, and their efforts to appear as they actually are seemed doom to failure. They just don’t have the skills to produce a convincing performance, but what sort of performance could be more convincing than a killing portrayed by its actual perpetrators? These staged productions are full of incongruous moments, just as one might expect from a story one learns by those who were actually there. A single narrator cleans up a lot of ambiguity, but a bunch of thugs trying to shape their own legacy? That is bound to produce more questions than it answers. In the interim, one is left with the image of a thug playing at being a thug in the full knowledge that he really is a thug.

One wonders what Jean Paul Sartre would have done with this?

The Act of Killing is far worse than this! It isn’t merely a farcicle study of bad faith, because victims of these atrocities are all over this film. Those killed are gone of course, completely silent all these years after their murders, but their friends and relatives are present, as are the memories of the community, and the knowledge of that community that these stories are indeed real, that the killers are just that, even now! For all the bad acting, and banal story-telling everyone knows that these people are truly dangerous men. Time and again, on-stage victims cry long after someone has yelled ‘cut’, and all the stroking and kind words in the world are of no avail for some of these people.

In one particularly brutal scene, a man tells us about his step-father, taken out in the night by a death squad. They found his corpse nearby in the morning. This story-teller explains this as he sits in a chair, about to play the victim of an interrogation and execution, and those who will torment him in the scene sit in stone silence. One wonders if they recognize the story, or if they may just be ticking off faces in their mind, wondering if one of them was this man’s step-father. No matter! The story is rejected, because there isn’t enough time to add it to their project, but one cannot help but think this story is just out of place. They are filming the glories of their own murderous past, not the horrors of their murder victims. A few moments later, the scene begins, and we watch a man who lost his step-father to the death squads play victim to the very men who carried out such killings. The acting is terrible, except for that of the the victim. He is, as you might imagine, absolutely spot-on! It would be an Oscar-worthy performance, except that it is difficult to call it a performance. …and when the scene is over, the man continues to sob as his interrogators move on to discuss the philosophical implications of their past. 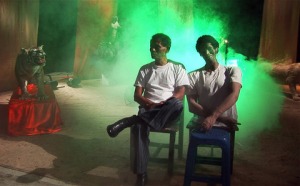 Time and again, the gangsters in this movie return to the theme of ‘freedom’. They repeatedly explain that the word gangster means ‘free men’, (They are playing on the origins of the Indonesian word ‘preman‘, which comes from the Dutch term ‘vrijman‘, once used for those trading in the region without the sanctions of the Dutch east India Company.) These same gangsters proudly brag of being just that, free men. They have chosen ‘Born Free’ as the theme song for the film; it’s significance is driven home by a dance number during which one of Anwar Congo’s dead victims thank him for sending them to a batter place.

…and gift him with a medal.

The word ‘freedom’ seems both incongruous and yet oddly appropriate to all of this. It seems strange to hear such a beautiful word falling from the lips of men perpetrating so much ugliness. And yet, there is little doubt that their understanding of freedom must resonate with the stories of their own lives. Surrounded by people afraid to contradict them, these men are indeed free. They do as they wish, both on and off screen, and they have done so for decades. This freedom is not an ideal to be shared; it is a freedom hoarded by the few at the expense of the many. It is the freedom of a man to take liberties with a young girl on a golf course.

But of course it is also freedom to do much more than that. 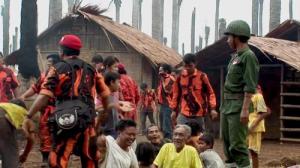 I wish I could say this vision of freedom was unfamiliar, but it simply isn’t. It is present in many times and places, from the defense of a freedom loving and slave owning Confederacy to the liberation of Germany from the oppression of ‘Jewish conspirators’, or for that matter to countless instances in which the privileged exhibit their own sense of entitlement, never quite noticing how much they take from others. Freedom it would seem, can sometimes mean liberation from the lives of others. It is hardly an innocent word; we just aren’t accustomed to seeing it covered in so much blood. But is the more innocent sounding freedom we enjoy here in the U.S. really all that divorced from this freedom that demands its victims? One has only to look across our borders or follow our commodities back to the lands that produce them.

..or to realize that the slaughter carried in Indonesia following the coup in 1965 with the full backing of the officials in the United States. After all, this was also freedom from communism! Freedom for Anwar to kill was also freedom from trade barriers. That freedom was a small drop in the ocean of consumer freedom we enjoy here in America to this day.

I’ll leave that point to the side for the present, but this movie contains at least one other important connection to daily life in the United States. It’s difficult to wrap one’s mind around the many layers of constructed reality in this film, gangsters playing at being gangsters and all that, but perhaps the most disturbing layer of this production lies in the role that gangster films may have played in the violence itself. The killers in this film are quite clear about their own inspirations being American gangster films. Many of these killers had been associated with the local movie theaters, theaters facing restrictions under the communist regime they would rebel against (it seems the film industry was suspected  of plotting against the government of Indonesia). Recruited by the military to carry out the mass killings, these same men drew inspiration from movies depicting gangster violence. So the loop closes once again, as the pretend killers who really are killers turn out to have been guided by the actions of fake killers in the first place, the very same ones you and I watch with a clean conscience.

…and this dark and painful ‘reality’ proves to be far more surreal than any artistic contrivance one could possibly imagine!

14 thoughts on “Much as Love and Murder, Freedom is a Many-Splendored Thing”