Stays in Vegas, my ass! What happens in Vegas gets bigger, wilder, and more sordid with every retelling of the story!

My summer in Vegas might even have included the slaying of giants, for example. Dice might have been involved, but let’s not dwell on the details. Other frequent activities included book night. Book club did involve Scotch I believe, or at least a Corona. I could say that I really don’t remember the books and leave it at that, but it’s entirely possible that no books were to be found at book night.

…or even discussed for that matter.

And if RPGs and an occasional beer ain’t wild enough for a good Vegas yarn, then let me tell you about the museums. Yeah, that’s right. Vegas has museums! No, I’m not going to tell you about the mob museum, because that’s just what you’re expecting me to do. But Las Vegas does have a Mormon!

I do recall a bit of neon!

And then there was the place that went boom! Lots to lean at the museum that goes boom. More on that on another day. The Mojave Penguin at the Clark County Museum was cool! The Springs Preserve was annoying, then amusing, then kinda cool, but there were absolutely NO butterflies, dammit! Pin Ball, you already know about, and of course there is the sexy museum that isn’t really that sexy! I took a former student to that place.  He declined to go next door. Otherwise, we’d have some real story to tell.

I met an old friend in an alley. Shhhhhh….

Downtown is always fun, and the Container Park rocks!

I narrowly escaped a giant flame-spouting mantis somewhere in that area. No big deal. So did the others, you might say. I know. I saved everyone!

Hoover Dam is still there. Much of the water isn’t. Dammit!

Also I biggened the moon while I was in the area. Yes, I did!

The strip? What happens on the strip might as well stay on the strip, cause I couldn’t care less.

Bob still makes great steaks, and Pam hasn’t greened a chili in a long time, but this summer was special. Plus Moni approved my gringo tacos, so I is a happy cookery-guy!

Vegas might well have included the Santa Monica Pier and a visit to Church, unless I was just sober. Not that I’m not often sober, or that any of this will make sense to you, but I don’t give a damn.

Or so I telled you!

Moni almost went boom at the corn dance. My fault on accounta I’m a bad person, but red chili be praised! She came out okay. My thanks to the kind people at Santa Ana Pueblo!

On a serious note, I really enjoyed our stay at Rancho Gallina and a chance to visit a couple of old friends. If you are ever planning a stay in Santa Fe, do yourself a favor and check out this bed and breakfast!

Yeah, there were utility boxes too, in vegas I mean, and the utility was sometimes amazing! I mighta seen a few other street-arts, some of which were quite cool. Or maybe they were hot, but only if being hot is cool, if you’re cool with that, I mean!

The View from Pikes Landing

I would tell you that Vegas included the Chena River, but that might be stretching the bounds of credibility, so I’ll just admit that was Fairbanks. I went to Fairbanks before I became really Southy, and Fairbanks was cool. That said, credibility is a damned kill-joy and he’s not invited into any more of my stories!

Also, I really am a bad man, and I will probably be kicked next time I go to Vegas.

I’m pretty sure this counts as metagaming!

Yeah, this is kinda creepy.

The terrible beast at the gates of the container park

A great guardian mantis stands outside the container park.

Carpe no diem. …in lake Meade

Santa Monica is pretty, but I worry about the fauna. ..flora. …fauna. …Argh!

So this is what people do in sunny and beautiful places!

Comedian John Fugelsang and the Choir.

Back of the container park.

A Phoenix in the back of the old Huntridge Theater. …Irony is a cruel mistress!

Back of the Beauty Bar as I recall.

Also the back of the Beauty Bar.

Nuther one from the back of the Beauty Bar.

The Neon Museum (AKA the Boneyard)

Inside the Mormon Fort!

Told you the museum goes boom!

You need these at the museum that goes boom!

Okay, the Springs Preserve had plenty of these butterflies.

Desert Bighorns! …the artsy kind at the Springs Preserve.

On the road again…

(My friend Monica took a lot of these images, and I think she even tweaked the colors a bit for her Instagram page.)

Blue in front of us and blue behind us. 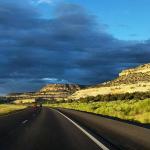 the road is cloudy and cool!

The dining hall and office for Rancho Gallina

Desk and Fireplace at Rancho Gallina

View from a friend’s house.

We have no pictures of the corn dance.

My friend had another guest.

9 thoughts on “With Apologies to the Moths Along I-40; My Summer! (Includes Pictures)”