A Guard Out Front

I was a little surprised to see a museum crammed into one of the small shops on 4th street in Anchorage. I was even more surprised to find just how much history they managed to cram into The Alaska Veterans Museum. It’s best to take your time in this place, because every inch of wall space in this venues contains something worth a second look, and maybe even a third.

The museum is of course a testament to the lives and work of Alaska’s veterans. For those of us interested in the history of Alaska, it also contains materials illustrating some of the more interesting parts of Alaskan history. No sooner had I walked through the door, for example, than the volunteer asked me if I knew where the last shots of the civil war had been fired. I suppose “the Shenandoah” wasn’t technically the right answer, but he smiled when I said it, and anyway, the point is they have a section for the history of this Confederate buccaneer up on the wall here.

…which had me smiling from the start of my visit.

The museum also features extensive coverage of the Aleutian campaign. It’s one of the quirks of Alaskan history. Where most of the lower 48 speaks of World War II as something that happened ‘over there’, some of the fighting actually did take place in this state. Not only did the Japanese bomb Dutch Harbor, they also occupied two islands in the Aleutian chain, all of which is well represented in the collections on display here at the museum.

The Alaskan Territorial Guard also gets prominent treatment here, though I am ashamed to say I didn’t get great pictures of that section. Just clumsy lensmanship on my part. The museum itself covers the history of this unit, comprised largely of Alaska Natives under the leadership of Major Marvin ‘Muktuk’ Marston. The unit (including a number of women) was charged with monitoring the coastline to act as a first line of defense. They also had to be on the look out for balloon bombs (sent over the Pacific in the hopes of starting forest fires in the U.S.).

The museum includes several outstanding dioramas, most of which feature naval operations. I struggled to get a good picture of the aircraft carrier, but in the end I had to settle for a few close-ups. The model itself was just too big to get in a single shot.

I was unfamiliar with the story of the U.S.S. Grunion, a submarine lost near Kiska, so this part of the exhibit was entirely new to me. One particular veteran, Percy Blatchford, had a section to himself. You can find him around the net as well. Each of the major conflicts of American history receive some treatment here, in each case focusing on the experiences of Alaskan military personnel.

A couple stories that didn’t get into the museum (at least I don’t think so) would include the Navy’s bombing of Angoon in 1882 and the story of Aleutian internment. They do cover the Japanese internment of Aleutians, but no mention is made of those taken off those Islands by the U.S. personnel. I’m not entirely sure I caught everything during my visits last month, and I am still amazed at the breadth of materials they got into the collection. As I understand it, they have a great deal more in storage, and that storage may be spilling into the homes of those behind the museum itself. It’s obviously a labor of love, so I suppose that is to be expected.

On one of my visits to the Museum, I had the pleasure of meeting Col. Suellyn Wright Novak who heads up the Museum. She had a number of great stories to tell, including that of the Alaskan Territorial Guard statue out in front. Some wonder why it doesn’t have a plaque on it? Those more observant have wondered why the information plaque is behind the guardsman. It turns out, the museum staff just didn’t want anyone to be run-over while reading the plaque from the street.

I am posting a few pics here, but of course they don’t do the museum justice. As usual, you may click to embiggen.

Course of the Shenandoah

DId I mention they have a model carrier?

They definitely have a model carrier 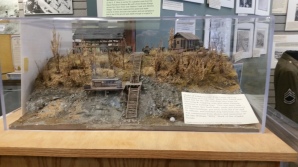 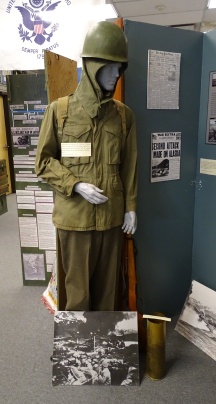 I think I would want a lot more uniform!

A Dress made of Parachute Silk 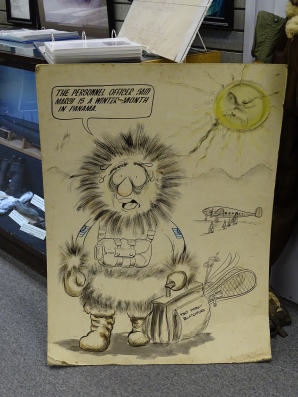 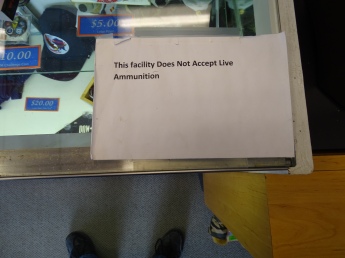 Hazards of making a wedding dress out of parachute silk.

U.S. Revenue Cutter, The Bear (This ship appears in many stories about Alaska)

This speaks for itself, I reckon.

Best to read from the sidewalk

…or the comfort of your home.

2 thoughts on “A Visit to the Alaska Veterans Museum”