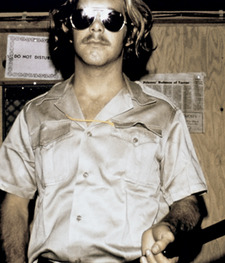 You’ve probably encountered the Stanford Prison Experiment in your psychology textbook, or perhaps heard about it in some other conversation. Ostensibly a study of the influence of power and authority on human behavior, the experiment (so the story goes) had to be closed down because it was all too successful. Dr. Philip Zimbardo set up a faux-prison in the psychology building at Stanford University and began recruiting test subjects. Having divided his subjects randomly into a pool of guards and another pool of prisoners, Zimbardo soon found the conflict between the guards and the prisoners had escalated beyond control. Zimbardo has spent his career describing the study as proof that good people will become monsters under the right circumstances.

Such circumstances would appear to include a badge and a uniform. …or perhaps a tenure-track professorship.

What fascinates me most about this story is the role that one guard, Dave Eshelman, played in setting the tone for the experiment. If the experiment was designed to illustrate the dehumanizing characteristics of power, Eshelman’s behavior took that message to 11. Aside from the possibility that his decisions may have thrown the whole study off, Eshelman’s personal experiments in cruelty are themselves worthy of serious scrutiny. Eshelman explained his approach to the project as follows:

I arrived independently at the conclusion that this experiment must have been put together to prove a point about prisons being a cruel and inhumane place. And therefore, I would do my part, you know, to, to help those results come about. I was a confrontational and arrogant, uh, 18-year old at the time, and uh, you know, I said, somebody ought to stir things up here.

I made the decision that I would be as intimidating, as cold, as cruel as possible. …I had just watched a movie called Cool-Hand Luke, and uh, the mean intimidating uh, you know southern prison ward character in that film, really was my inspiration for the role that I had created for myself.

Fittingly, Eshelman adopted a southern accent for the experiment and engaged in a deliberate campaign of cruelty against the prisoners. It might be ironic that Eshelman’s emulation of Strother Martin earned him the nickname of John Wayne, or perhaps it’s just damned appropriate, but anyway, …that’s two movie references for the price of one villainous act.

Eshelman’s approach to the experiment is fascinating on many levels. He knows he is participating in an experiment, and he takes this as license (even incentive) to perform experiments on his own initiative. His personal experiment is theatrical in nature; Eshelman is enacting sadistic themes borrowed from a Hollywood film with the end result being a drama fit for a textbook.

But of course someone had to live through that drama, and I’m not talking about Eshelman.

What’s interesting here is the blurring of the lines between real cruelty and its occurrence in a theatrical performance. If Eshelman’s behavior was simply a performance, the scope of his audience isn’t entirely clear. Was it for Zimbardo? The prisoners? The Scientific community? Himself? Perhaps Eshelman’s performance was a kind of singularity, so to speak, an act that simply had to happen (in his view at any rate). Perhaps, his display of cruelty held some kind of meaning independent of any particular audience.

But of course this was an interactive performance, and at least a big part of Eshelman’s audience would have to include the very people he subjected to cruelty in that performance. If Eshelman respected any boundaries, his cruelty certainly violated others (and yes this is one reason why we don’t do experiments like this anymore folks, …at least I hope not). The prisoners actually did feel the impact of Eshelman’s actions, and some (Clay Ramsay, prisoner 416 in particular) clearly described Eshelman’s behavior as genuinely harmful. If Ramsay was part of the audience, and he most certainly was, then he certainly did not experience Eshelman’s cruelty as an artistic or intellectual matter. Ramsay clearly felt harmed by the experiment.

Perhaps the most interesting exchange in first the film clip above above comes at minute 25, when Eshelman and Ramsay (prisoner 416) talk to one another as part a debriefing process. The two of them do not appear to have shaken off their respective roles in that moment. Eshelman is still taking charge of the conversation. He still dominates his former prisoner, and takes it upon himself to set Ramsay straight about the whole project. If Eshelman’s behavior was an act, the act clearly wasn’t over in that debriefing session.

The Stanford Alumni Magazine has an excellent retrospective piece on the subject, including statements from participants 40 years on. Eshelman’s own thoughts are definitely worth looking at. Both of Eshelman’s pictures featured above were taken from this article.