What to make of Indian casinos? I expect a lot of non-natives still don’t quite know how to answer that question. Maybe some Native Americans don’t either. But it’s an interesting question just the same, not the least of reasons being that anyone trying to answer it will have to struggle a bit with the larger questions about the politics of Indian-white relations. Some people handle that better than others of course. I’ve known some folks that seem to think of gambling as a kind of racial entitlement. These same folks don’t seem to think of Las Vegas or Atlantic City as a form of racial entitlement, but all foolishness aside, the topic does raise a number of interesting questions about jurisdiction and the economic impact of gaming in such distinctive communities.

The impact of Indian gaming on different tribes isn’t uniform. We’ve all heard the stories of wild success of certain tribes whose members became rich overnight. Most of us have heard speculation about the membership of certain tribes. Our incoming President had some words about Indian casinos back in the day. They weren’t any more thoughtful than the crap he’s spewing now. But of course these wild success stories are hardly typical of the many tribal casinos out there. There have been some disasters, or at least some scandals, as well. I recall once listening to Ron His Horse is Thunder, former Chairman of the Standing Rock Sioux Tribe explain the significance of casinos in his own community. They provided a certain number of jobs, he told us. That was it. No miracle. No disaster. Just a steady livelihood for a certain number of people. That was his experience with Indian gaming. I hope I remember him correctly on this, because I reckon that’s a fairly common account of the issue. But of course all of these stories come with the benefit of hindsight.

It wasn’t too long ago that the entire subject of Indian gaming was uncharted territory, that the mention of reservation casinos raised all sorts of possibilities and few people had any real experience to bring to bear on the issue. It was around that time (the mid 90s) that I arrived in Navajo country. Numerous tribes had casinos at that point. The Navajo Nation was not among them. Some out there wanted casinos. Others didn’t. Folks kept a wary eye on the operations of other tribes, looking for some sign to help assess the prospects for gaming in their own community. In 1997 the Navajo General Council called for a referendum on the prospect of gambling on their lands. It was the second such referendum (a third would follow in 2004). It set the stage for a interesting debate which I followed as best I could.

Today, you can find a few casinos on the borders of the Navajo Nation, but in 1997 the answer was no. In some quarters, it was Hell No. The reasoning still interests me. 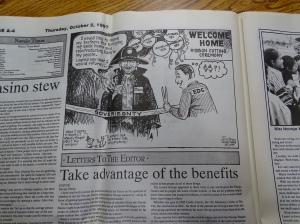 One of the most fascinating things about the debate over Navajo gambling in 1997 has to do with an aspect of Navajo origin legends. One of the greatest villains in these stories was a character, named Noqoìlpi, The Gambler. You can read more about him by clicking that link I attached to his name, but to put it briefly, this fellow just about wins the world and everyone in it by gambling. Frankly, I think there’s a lesson about the economic effects of modern financialization schemes and the growth of income inequality there in that story (seriously), but I’ll save that for another day. In 1997, the connection drawn by many on the Navajo Nation was a lesson about the evils of opening up casinos on the reservation. Whatever the strengths or weaknesses of this argument, it certainly added a rich layer of meaning to an already interesting subject.

Of those working references to The Gambler into their arguments on the topic of casinos on the Navajo Nation, my favorite was the late Vincent Craig who ran an extended series of Mutton Man cartoons addressing this and several other issues in the Navajo Times. He really blended his own critique of gambling with a broad range of (extremely ironic) social commentary.

It all begins with a culture pill. .

Unfortunately, I don’t think I have copies of all the cartoons he ran on this topic. I don’t know that he got a cartoon in every edition of the Navajo Times, but I definitely have gaps in my own collection. Anyway, I collected enough to get the gist of his argument down. I’ll let Vincent and some of his colleagues tell the story from here.

A bit more on the subject, also from the Navajo Times (again, click to embiggen): 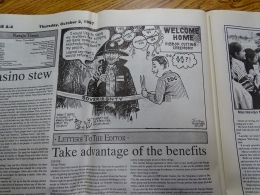 10 thoughts on “A Cosmogony of Gambling”