I haven’t been monitoring the controversy about the Washington football team that closely for awhile now, but the topic hasn’t entirely escaped my attention. This morning, I took a moment to scan the old Redskinsfacts website, which is a case-study in double-speak if there ever was one. That hasn’t changed.

One thing I find fascinating and revolting in equal measures is the way the site uses the work of a linguist, Ives Goddard, in defense of the team’s name, If you click on the option to “Get the facts” on the home page of the “Redskins Facts” website, you will be taken to another page telling you about the history of the name. Near as I can tell, that page hasn’t changed in awhile. Here is a screenshot of that history as it is now on 4/19/18: 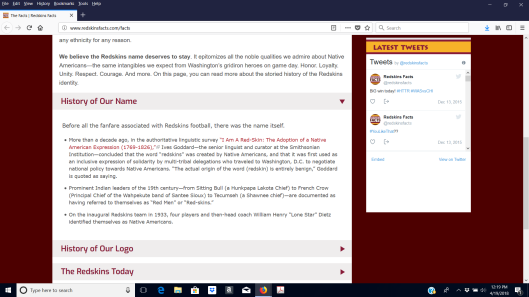 With just three items, this is a brief history to be sure, but the omissions aren’t entirely a function of brevity. What they leave out here is every bit as important as what they choose to tell us. Taking their bullet points in reverse order:

Notice they tell us that when the team came into being four players and the head coach “identified themselves as Native Americans.” This wording was carefully chosen to promote a common team legend without actually claiming that legend is true. Defenders of the team name commonly tell us that the team was named after a Native American (William “Lone Star” Dietz). It’s not at all clear that the team name was ever meant to honor him, but more importantly, Dietz’s claims to Native American heritage are questionable at best, having come under intense scrutiny when Dietz stood trial for evading the draft during World War I. The folks at Redskinsfacts.com know very well that team fans team defenders still cite the story of Lonestar Dietz in defense of the team name. Telling us that Dietz claimed a Native American identity enables them to promote that story without actually making any false claims on the topic themselves. So, I guess it’s not an outright lie. More like, a cowardly equivocation.

The second bullet point in this ‘history’ is simply off topic (and rather vague). That prominent native leadership of the 19th century, have referred to themselves as ‘redskins’ does not establish that the term is not now or at any other time free of pejorative implications. Resting as it does in this simple, narrative the claim that some of them have done so does nothing to tell us how they felt about the term or why they came to use it. It doesn’t even enable us to sort which ones called themselves ‘red men’ and which ones called themselves ‘redskins’. It doesn’t address problems of translation. It really doesn’t establish anything except for the sloppy thought process of the website administrator. He’d have to answer a few questions before we could even get to the ‘so what?’ part of the conversation. Or we could just skip to the chase, I suppose.

The first point in the pseudo-history of the team name is the one that interests me the most. Defenders of the name will often cite Goddard’s article as proof that the term in question is not an insult. (Seriously, I’ve long since lost track of the number of people that have done this,) I always ask them if they have actually read the article. Often that seems to be the end of the conversation. When these folks do tell me they’ve read the article, I ask them if they’ve read the last line in the article. To date, none have answered that question. So, what is the last line in Goddard’s article?

The descent of this word into obloquy is a phenomenon of more recent times.

My point is of course that Goddard didn’t write an article telling us that the term in question is not an insult. He wrote an article telling us that it did not begin as an insult, which is an entirely different claim. It isn’t entirely clear from Goddard’s piece just how he would account for the present significance of the term, but he is very clear on the fact that his own work does not actually address that question. So, the article should leave us with a full stop right around the 1830s. Goddard helps us to understand the use of the term up to that point, and he doesn’t have much to say about anything after that.

Goddard’s work is interesting for a number of reasons, but it doesn’t tell us much about what the term means today, or even what it meant by the end of the 19th century. He does take issue with the claims of at least some modern activists, Susan Shown Harjo being among them, but he himself points out that rejecting her claims about the origin of the term does not prove that many Native Americans find the term objectionable in the present time (p.1). I think Goddard does a pretty good job of showing that Harjo and others have been wrong about the origins of the term, leaving the rest of the case against the team name largely untouched by his article. The correction seems a bit one-sided to me, but at least Goddard has been clear about the limits of his own work on the subject. If he has published anything addressing the later history of the term or correcting any of team’s misuse of his work, I am not aware of it. (If anyone does know of such a response, I would very much appreciate a reference.)

So, why is Goddard’s work the first thing Redskinsfacts.com cites in their history of the term? Well they have to know that many people equate the origin of a term (or at least our earliest known account of it) with its contemporary meaning. This is called the etymological fallacy, and it’s an extraordinarily common mistake. So, they don’t really have to tell us the article proves the term is innocent; the folks at Redskinsfacts.com know very well that is what many of their fans will take away from their reference to the article. Citing Goddard and providing a link to his work enables them to strengthen the impression that the team name is innocent without actually going so far as to say that’s what Goddard has shown. They invite their readers to indulge in an etymological fallacy, just as they invite us to think of Lonestar Dietz as a Native American when he was likely an outright fraud. It’s fascinating to see how the site avoids making the false claims in question, even as they invite readers to infer those very claims from the one they do make.

1 thought on “Epithets and Implicatures, and History as Damage Control”