This painting is one of the reasons Custer is still remembered as a hero in some quarters. To quote a fellow-blogger:

In 1884, eight years after George Armstrong Custer’s death, the Anheuser-Busch brewing company commissioned an original oil painting, Custer’s Last Fight, by Cassilly Adams.  It was reproduced as a lithograph by F. Otto Becker in 1889 and distributed as an advertising poster by Anheuser-Busch.  This depiction of the Battle Of the Little Bighorn undoubtedly hung in more saloons than any image before or since, and fixed the iconography of Custer’s last moments in the national imagination.

I am told the image represents the terrain at Little Big Horn reasonably well, though some question its depiction of the soldier’s uniforms, the lack of guns among the Sioux, and of course Custer’s heroic posture in those final moments is open to more than a little doubt. What makes this image a truly golden bit of absurdity, however, would have to be the Indian shields.

…just a little off. 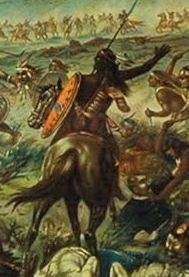