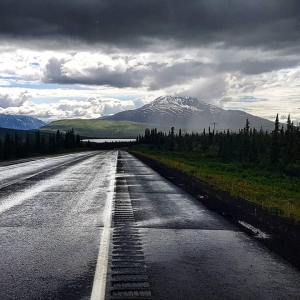 Moni likes to take pictures of the road.

Between her new job and our move into a new apartment, my girlfriend and I haven’t had much of a chance to to travel together this summer. We did manage to sneak out for a week or so in mid June. What we decided to do this time was a quick road trip from Anchorage to Valdez. Of course, getting to Anchorage required a little flying time, but that’s old hat. We had to make a couple purchases for the new place, so that meant staying a couple days in the vicinity of Anchorage, so we found a lovely bed and breakfast in Palmer.  After that, we hit the road!

Not literally, of course. I ain’t got nothin’ against the highway.

Anyway, the trip was about a 5 hour drive, but we made plenty of stops. We traveled along the Matanuska river for quite some time, made a brief stop a bit south of Glenallen, then headed off toward Valdez. To say that we found a number of beautiful sites along the way would be putting it mildly.

Valdez itself was absolutely wonderful. I hit a couple museums (The Whitney Museum and the Valdez Museum & Historical Archive) and we hung out at the docks for a time. We ate at the Fat Mermaid a couple of times and made stops at Mike’s Palace and Fu Kung. …suffice to say that we were well fed. We also ran into the folks from Sweet Cheeks Bakery, run by the parents of a coworker, but we didn’t get back in time to get our cinnamon buns. Still, …all of Alaska is just one small village! You just can’t travel through this state without finding connections to the people you meet. Eventually, we bought tickets on a tour boat, which of course meant that I got sick (yes I took some meds), but mostly that was just amazing. I almost never opt for a paid tour, but I’m very glad I did this time.

On the last day as Moni and I were strolling around downtown getting ready to say goodbye to the place, a random guy came out of Mike’s Palace and asked us if we lived in the area. The answer was ‘no’, of course, and then he proceeded to tell us that he had lived here himself once, 30 years ago. I cringed inside as he launched into his efforts to tell me about the good old days. A few minutes later I felt a twinge of sadness as he left us with tales of bar fights between Okies and Texan (oil workers) spilling out of the Palace and onto the street. Apparently, the police had once been disarmed so as to enable the fight to continue. Additional stories involved a pair of Korean prostitutes who paid him extra for a pizza every night so as to have a place to stay. Just how much of this was true, I have no idea, but the stories were a good deal more entertaining than I had anticipated. I found myself wishing we’d run into him before lunch rather than after and on the verge of leaving. Still, a few more eagle pics and off we went.

Hell, even the shopping we did back in Anchorage before boarding the plane back home went well.

I wish every vacation was this cool. 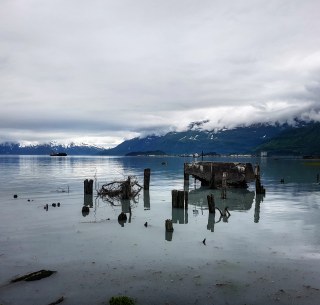 Mountains in the Background

Factory across the water 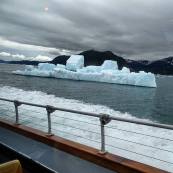 The chunks of ice on top got there when they were thrown up out of the water as the ice broke apart. 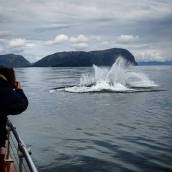 This juvenile whale was playing around the boat for about half an hour. …his mom was not amused.

Random Waterfall empties into the sea

Looks Kinda Smug for a guy that lives on the scraps tossed out by fisherman!

When you look into the scenery, sometimes the scenery looks back at you. 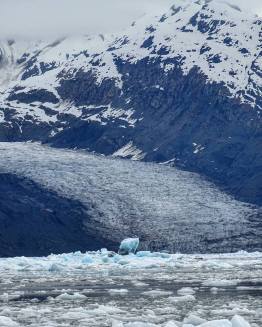 Are these guys ever not angry?

This, I’m told, is an oyster catcher.

Almost an island of sorts 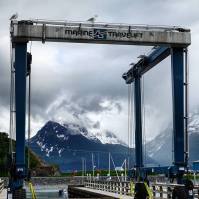 That mountain was framed! 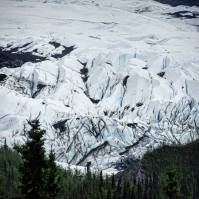 Moni likes to stop and take pictures of the road. 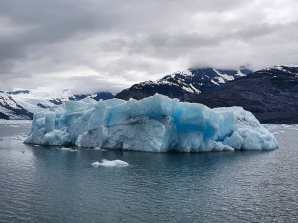 Closest I could find to street art 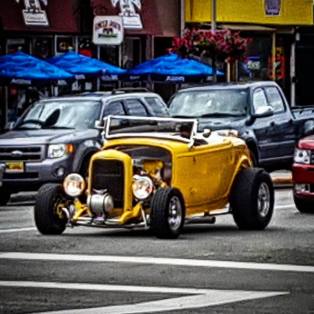 Columbia Glacier has the blues!

Couldn’t get over the color of the water

You otter sea the mountains!

Abandoned structure along the Matanuska 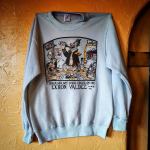 The view from the Snowgoose BnB