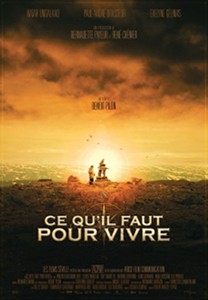 What are the Necessities of Life?

We meet the protagonist of this 2008 Canadian film in Baffin Island of the 1950s. Tiivii (played by Natar Ungalaaq) struggles for breath as he ascends a small hill in search of geese, his wife and children are just waking in their tent below. Upon seeing a boat on the half-frozen ocean, Tiivii sets aside the hunt and takes his family aboard for a series of medical tests. As the boat prepares to leave, Tiivii is told he must remain aboard, leaving his wife and children to fend for themselves while he undergoes treatment for tuberculosis.

When next we see Tiivii, he is soon staring at a tree at the hospital in Quebec City, amazed at his new surroundings and quite unprepared for the coming hardships that await him. He does not fully understand his illness, nor does he realize how long it will take him to recover. He also has no idea how his family will fair without him.

An Inuit lost in civilizations? It’s an interesting twist on a familiar theme, that of a stranger in a strange land. The point is soon driven home as we see Tiivii struggle to master the use of a fork and spoon while the other hospital patients consume platefuls of pasta. He figures it out, but not before earning the derision of his roommates.

Through the story, we are invited to see the hospital and western civilization through Tiivii’s eyes, to see common utensils from the perspective of one who has never used them before and to imagine a common meal from the standpoint of someone has never eaten anything like it. We can also imagine his confusion at the sterile bathroom with its flush toilet; his longing for someone to talk to makes perfect sense; as does his desire to eat familiar food. 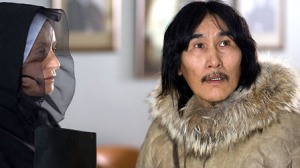 We’ve seen this storyline before, a person completely out of his element. It is often used to explore the differences between civilization and savagery. This was the premise for Dances With Wolves, and before that with Little Big-Man and A Man Called Horse. It’s a common enough theme in arctic films as well, being found in White Dawn and Snow Walker among others. What makes this film different is the trajectory of the stranger in this case; he has left a world unfamiliar to most of us, to enter one most of us will find rather familiar. We are used to seeing the story go the other way. Still Tiivii’s journey is compelling. Through his eyes, the western world becomes strange, unreasonable, and quite insane.

This particular twist on the stranger in a strange land contains an element of nuance, however, that would be easy to miss. Audiences may think they know what it means for an emissary of modern western society to live amongst primitives, but what does it mean for such an individual to come live amongst us, or at least the 1950s variation thereof? It would be easy to think that Tiivii spends the entire story marveling at the wealth and richness of the city. In the space of a few opening scenes he has made a transition from the life of a forager scratching out a meager existence on the tundra to a cosmopolitan center with all the wonders of contemporary society. Tiivii may see this world from the shelter of a hospital bed, but he does see it just the same. How could he possibly understand the complexities which have put food on his plate in that hospital, or those that enable him to flush that same food away in the porcelain toilet? It would be awfully easy to think of this as the story of a simple man lost in the wealth of the modern world
…except that would not explain the title of the movie.

The title comes to us in a scene near the end of the film, one in which Tiivii explains to a young patient named Kaki (Paul-André Brasseur) what it is like to be out on the tundra. Although Inuit himself, Kaki, has spent his formative years in the hospitals. He does not understand the kind of life his own people have led. Asked what his homeland is like, Tiivii explains:

Beautiful. Lots of mountains. From the top you can see everything. You can see exactly where you are going. Not like here, where there are trees everywhere and you can’t see ahead. There’s a huge island. It takes many days to travel around it. There’s everything you need, all the necessities of life. Seals. Caribou. Geese.

Tiivii’s face lights up with each point of his speech, but the point of the scene would be missed entirely if this was thought to be nostalgia. Tiivii’s speech provides the strongest hint in the movie as to just how he sees the world around him. It is not a world of abundance at all; it is one in which he cannot see the materials out of which to make his clothes much to less to build a home. It is a world in which he cannot see food or medicine. All of these things must be brought to him. If this is mysterious, it is not the mystery of a miracle so much as a perverse trickery, one which hides the means of life from him while doling out the necessities a little at a time. Far from marveling at the wealth of civilization, Tiivii has been lost in the desert the whole time. He doesn’t see modern miracles in plumbing or cutlery. Instead he sees a world of mostly useless materials.

I think this is the real genius of Necessities of Life, that it actually flies in the face of conventional notions of the difference between foragers and civilized folks. Ever since Nanook of the North, mainstream film-makers have marveled at the struggle of arctic hunters against hunger and the elements. Time and again, Hollywood’s ‘Eskimos’ have been portrayed as dwelling on the edge of starvation, and it would be awfully easy to see in Tiivii’s story just another chapter in that narrative, one in which one of these primitives actually gets to experience the wealth of modernity. And yet, what Tiivii actually tells us is just the opposite; wealth is waiting for him back home on Baffin Island, and he cannot wait to leave the extreme poverty of the modern world behind.