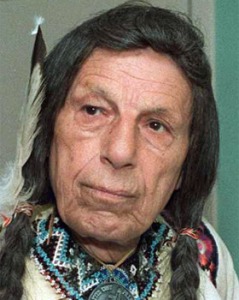 I was a kid when I first saw that image, and I distinctly recall the sense of shame I felt upon watching it. It wasn’t just that I’d seen people littering like that, I’d done it myself. In fact, littering was pretty damned common back in those days, hence the commercial! I don’t think it’s a stretch to suggest the image of that crying Indian moved a lot of people to rethink their behavior.

Some of it anyway.

So, I was pretty damned surprised to learn many years later that the crying Indian belonged to a rather unusual tribe. He was Italian. ‘Iron Eyes Cody’ was born Espera Oscar de Corti. He had been playing Indian parts in the movies ever since the 1930s. Cody claimed Cherokee and Cree ancestry during much of that time, but this appears to have been a fabrication.

It’s tempting to think of Cody as an outright fraud, but that doesn’t begin to cover the facts of the matter. By all accounts, he seems to have actually lived the life he proclaimed. Cody married a native woman and adopted native children. He assumed a Native American identity on and off-screen, supported native causes, and essentially became the role he played in real life. Just what the process might have been in his own mind is something of an open question at this point, albeit one that most of us will never have an answer to. He is a rather successful example of a white Indian, a non-Indian who went native, so to speak.

One could well wish the ‘crying Indian’ had been a ‘real Indian’, and it’s hard not to feel a little betrayed to learn the truth of Cody’s ancestry, and yet he still remains a sympathetic figure. It’s tough to let him off the hook entirely for his self-presentation, but it’s also tough to be too hard on him for it. His story reminds me of an old line from Kurt Vonnegut’s book Mother Night; “We are what we pretend to be, so we must be careful about what we pretend to be.”

By that standard I’d say Cody did pretty well in life.

The photo above was taken from Cody’s obituary in the Los Angeles Times. Cody has his own Snopes page of course, and the Wiki article on him isn’t bad. Findagrave also has a decent write-up.  It’s interesting to note that these sources provide different times and dates for Cody’s birth, with the L.A. Times piece coming in as the outlier with 1916 and Fort Gibson, Oklahoma. The others tell us Cody was born in Louisiana, and in 1904. Cody also features prominently in the documentary, Reel Injun, which is definitely worth a watch.