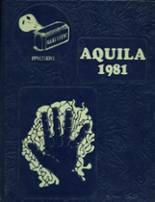 Something today set my mind down an old alley, so to speak, a memory I had all but left behind for good. I couldn’t help but smile as I remembered “The Nuke Table” from Mrs. Lenning’s old classroom during my Freshman year at Boulder City High School in southern Nevada. The Nuke Table was largely my doing, …or perhaps I should say that it was a transgression for which I was largely the main culprit. It was a large, sturdy wooden table that served as my seat more often than a writing surface, at least if you mean by ‘writing surface’ one on which you would put put a notebook, a paper, or a test before commencing to write.

The table itself? Well that I was happy to write on.

And between Drama, Speech, and many lunch hours in which Mrs. Lenning graciously allowed myself and others to hang-out and goof off in her room, I managed to write on that table an awful lot.

…it was mostly just the one sentence!

The sentence began in fashion folks would have found quite familiar in the early eighties. I wrote “Nuke the…” From here of course one would normally insert something like ‘seals’, ‘whales’, or even ‘gay-baby-whales’ in a macabre joke that had already become quite old. To grasp the fascination with this trope you have to wrap your mind around both the fear of nuclear war and the extreme irritation at sundry environmental causes common to the times. I suspect many today will manage the latter easily enough, but the scale former problem may be a bit foreign to those fortunate enough to have been born after the ‘collapse’ of state-sponsored communism. All these nuke jokes helped to allay fears over the one, by setting them full horror on the other.

Simple scapegoating; good fun for everyone.

But not for me. I turned that theme into one big glorious run-on sentence, adding one more dependent clause after another with every lunch hour. You had to read the whole sentence to determine just exactly who was to feel the wrath of the atomic age as I would have directed it. The target of the nukes changed from one day to the next as I added more information about just who should be nuked, but of course that was part of the fun. Others added their two cents here and there, but for me this table had become something of a personal project.

How I got by with this? Well, you’d have to ask Mrs. Lenning.

The thing is, the joke really wasn’t as innocent as I would have pretended at the time. No, I don’t mean that I actually wanted someone killed, much less blasted away along with anyone foolish enough to live within a short drive of them, but I certainly was working a pointed theme, and that theme was hippies and a range of left wing types I had come to associate with them. Tongue-in-cheek as the whole thing was to me, I did show some real resentment with that pen of mine.

Gee! Someone else who hated hippies?

The thing is that I didn’t hate hippies, not really. I had some fond memories of the off-beat personalities that used to wander through our house in Apple Valley, California just four or five years before. I had a few bad memories too, but enough good ones to know better than to vent that kind hatred at people I was actually happy to have had in my life. Dad was a college professor when we lived in California, retired military, and politically conservative. So, how we came to be adopted by the local counter-culture is beyond me? But that we did. And our house became a regular stopping point for many of the folks living off the grid, so to speak, just a ways out from town. This was something of a mixed blessing of course, but  a blessing it was.

…well, except when I was sitting on The Nuke Table in Boulder City, Nevada, pen in hand.

Truth-be-told, I think I took to capping on hippies a lot that year. For whatever reason, I had little good to say about such folks at that point in my life. This was despite my hair, which was as long as I could get it before my parents lost their patience; despite my growing habit of walking barefoot on the hot summer ground; despite the jumble of ‘spiritual’ thoughts then ambling through my brain, and despite a love of personal freedom firmly rooted in liberal tradition. It was despite the fact that virtually all of my friends were stoners, which was as close to a ‘hippie’ as the social categories of my own high school could get me. The point is that for all the contempt I had begun to express for the long-haired people in my past, their influence was all over me.

And I was smart enough to have known that.

And maybe that was the problem. If I hadn’t learned a thing or two from the counter-culture of the previous generation, it wouldn’t have mattered. Hippies had not earned a virtual nuclear attack in my virtual universe because they were so very different from me, but rather because they were so very similar. For one reason or another, at that particular time in life, I needed to distinguish myself from the long-haired freaks I still remembered with a smile. That phase didn’t last long, and somehow the excesses of the nuke-table were enough to purge a lot of it from my thinking.

Perhaps that is why Mrs. Lenning let me have the Nuke Table, at least for a time.

…and the Nuke Table.