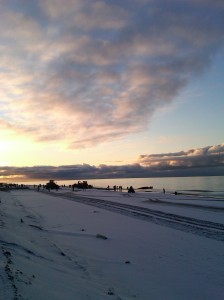 Landing a Whale in the Fall

When I first got into Navajo country (many years ago) my old boss used to laugh and say that Ricola was traditional Navajo medicine. I remember him singing the name lightly as he got out a piece. No, he wasn’t suggesting that Navajos had invented Ricola. As I recall, his throat used to get scratchy during all-night chants. His remedy of choice, Ricola, helped him get through the long evenings with his voice intact. His phrasing was intentionally ironic, of course, but my old boss had in fact made this commercial medicine part of his own traditional regimin.

You can find that sort of irony in all sorts of traditional indigenous activities.  It can produce the sort of wry humor of my old boss and his cough medicine, or it can give rise to deep suspicions. A lot depends on who is calling attention to the irony. The issue often comes up in my classes here on the north slope of Alaska where the dominant traditional themes are associated with hunting and whaling. The indigenous peoples of Alaska retain substantial rights to subsistence activities which include the taking game. That they frequently use modern technology in doing so hasn’t escaped notice, but what of it? That’s an interesting question.

The issue popped up a number of years back when the New York Times published a piece on the Fall whale hunt here in Barrow. Its title put the between technology and tradition front and center:

With Powerboat and Forklift, a Sacred Whale Hunt Endures

If the purpose of this rather clever juxtaposition wasn’t clear enough at the outset, one didn’t have to read far into the piece to see the point driven home rather clearly. In the very first sentence, its authors (William Yardley and Erik Olden) declare that “The ancient whale hunt is not so ancient anymore.” They go on to quote whalers themselves saying things such as “Ah the traditional loader” and “ah the, the traditional forklift.” And with that introduction, the authors go on to explore the paradox of traditional activities carried out with modern technology.

Suffice to say, many in Barrow were not amused.

Edward Itta, former Mayor of the North Slope, published his own response in the Alaska Dispatch News (ADN), suggesting that the authors had failed to grasp the cultural context in which indigenous whaling takes place. A subsequent ADN article focusing on Wainwright took the time to castigate Yardly and Olden for focusing on the nature of Fall whaling instead of Spring when whalers use walrus skinned boats. Yardley and Olsen too had commented this fact, but the point was easily lost in the overall narrative highlighting the use of technology in whaling practice.

I keep coming back to this piece, because the questions raised in that article keep coming back to me. Often it’s a student new to the region who fields the question in one form or another, is it still traditional if people can use modern technology? I struggle to get across the best answer I can. I can point folks to Iñupiat who can answer the question much more authoritatively than I can, but frankly, I think there is a reason I get these questions. As another outsider, I suppose, I may be thought a safe person to ask. I reckon they figure I won’t get mad.

This does strike me as an honest question, at least in the sense that those asking it usually seem to be sincere. Just the same, measuring legitimacy of native traditions by the use or absence of modern technology does skew the issue in some very toxic ways.

On one level, I find myself wondering if the Amish haven’t become the paradigm case for traditional anything in the minds of so many people. I reckon it’s up to Iñupiat to define their own traditions as they see fit, and to the best of my knowledge, there just isn’t anything in there against using the most productive technology available. The tradition is taking a whale, not doing it with a particularly pristine kind of harpoon, much less butchering it using only native equipment. The notion that using technology constitutes a failure of authenticity is an assumption coming from outsider.

It isn’t a particularly helpful assumption at that.

Which brings me back to the jokes at the beginning of that old New York Times piece. I can’t help wondering if the authors might have gotten the point of the humor wrong. Hell, it might have been their editor who skewed the whole piece, I don’t know, but in its final form that article clearly takes each of those jokes to be an admission of sorts, a subtle concession to the inauthenticity of the activities in question.

I read those with echoes of my own boss singing ‘Ricola’ in the back of my head.

It seems at least as likely that the point of the humor had something to do with the adaptability of tradition. The question may not have been, is this really traditional, but rather how could it be otherwise?

What makes whaling traditional? Yardley and Olsen touched on this when they noted the distribution of boiled muktuk (edible blubber and skin) to those present as the whale was butchered.

Much of the community comes to watch as a whale is burchered. More to the point, much of the community pitches in to help. Even more have helped in one manner or another to provide support for the whaling crews during the course of preparations. Where possible, employers grant leave to those engaged in whaling, and teachers accept absences during whaling season. We’ll work it out later. You would be hard pressed to find a resident of the North Slope who doesn’t provide some sort of support to whaling activities, even if it’s just acceptance of the way the whaling season restructures all of our other activities. Whaling is a community affair, and its impact on the community re-enforces numerous personal relationships.

The tradition is also found in freezers throughout the North Slope, many of which contain muktuk and other delicacies received as gifts from the whalers. It can be seen when a successful crew serves a meal to any who come by their home, and you can see it again during Nalukataq (a Spring festival) when pretty much anyone can walk into a the festival square, sit down, and receive all manner of food from these very same crews. What makes whaling matter is the way that it shapes relations between people all over the north slope, and in that respect it continues many of the same patterns that predate the presence of outsiders like me who ask too many questions, and sometimes fail to learn the answers. If we’re looking for the traditional components of whaling, this is where you will find them.

This social emphasis too is complicated as Hell, but it’s actually relevant. We can ask, for example, how the use of technology ties subsistence activities to modern markets, how use of a snow-machine instead of a dog team changes the work regime for participants in whaling and hunting. We can ask how the presence of grocery stores changes everything, and how the jobs needed to earn money for modern goods and services change the lives of people all over the North Slope. The answers to such questions might also leave us with a less of pristine sense of what tradition means in subsistence activities, but they point to a different sense of the problems at stake in these issues and a different sense of the threats to community practice.

Simply pointing at a forklift is a bit of a gotcha game. Unfortunately, it’s a game played all too often by outsiders looking at indigenous hunting practices. More and more, I find myself thinking the game begins when people look in the wrong place to understand these practices. They come and they watch the whalers at work on the ice or harvesting a catch on the beach.

Where they ought to be looking is in those freezers.

My point is that people who want to understand the significance of whaling or any other aspect of traditional subsistence need to look at the way the work and the results are shared. They need to look at the festivals, the potlucks, the serving events around town, or simply at the moments when someone walks up and hands someone else a helping of food. That’s where the tradition is held together, and that is precisely why the damned forklift was traditional after all.

Just like the Ricola my old boss used to love.