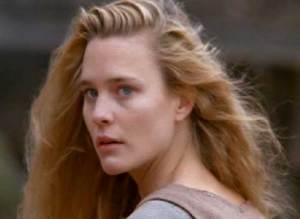 What is it that her principal love interest keeps saying to lovely  Buttercup at the beginning of the movie? “As you wish.” Whatever Buttercup  tells him to do, Westley answers with “as you wish.” Seriously, if hearing that doesn’t make you shudder, then this witch’s powers have already reached through your flatscreen TV monitor and bitch-slapped the good sense out of your soul. That isn’t love; it’s co-dependency. Learn the difference people!

My God, what that poor soul, Westley, must have been through to have been reduced to such a wretched state by the start of our little fairy tale. And this is but the first caress, a mere taste of the suffering Buttercup is capable of inflicting on people. Long before Lt. Columbo begins to relate this tragic narrative to the helpless little boy he is about to horrify, the dreaded Butterup has already reduced our would-be hero to a mere shadow of a man.

But of course Westley’s suffering is only just beginning, because it is “true love” that keeps him alive when he is captured by pirates. Are we really supposed to believe that this witchcraft is benign? Small wonder that when our kitty-whipped hero re-emerges he is clothed in black just like any other form of living dead would be. One can only guess at the horrors his own victims have suffered, all at the hands of a man empowered by little other than his morbid devotion to a woman far away!

It does not end there, no. First the lovely miss Buttercup seduces a boat-load of innocent men and leads each of them one by one to their ruin. First Inigo, then Fezzik, and finally Vizzini, each in turn meets our mere shadow-of-a-man on their own terms, and each faulters in a test of his own greatest strength.  Are we really supposed to believe that the spineless little co-dependent has developed so many talents in his short years as an undead pirate? No, my friends, it was the malevolent power of the lovely Buttercup that weakened these once proud men and brought them all to ruin.

I know it’s a fairy tale; strange things are supposed to happen. My point is that fairies can be fricking scary. If Buttercup does not scare you yet, then you have got balls of steel my good reader.

Let us not even consider the many examples of Buttercup’s other monstrous powers; her moral destruction of a Prince and likely his entire kingdom, the reduction of a high priest in all his dignity to a mere Pythonesque caricature, the pointless slaughter of unusual and probably endangered swamp creatures, and the morbid double reanimation of twice-dead Westley by a pair of witches who conveniently enter the story just in time to keep the finally-vanquished abomination going.

Seriously, they say that it takes 4 witches to make a coven. We know who the first 3 are, but Princess Bride never reveals the fourth. I have my suspicions.

But that is of course the real power of Buttercup, Mistress of Ultimate Evil. She reaches right through the story and corrupts to heart of a young and defenseless boy. Does he not ask his uncle to read the part with all the kissing? And what self-respecting young boy would ever do that? None, I tell you. And in that moment, this movie reveals the real target of Buttercup’s mischief. It was the boy she was after all along. It was his heart she sought to corrupt, his will she sought to weaken. And she succeeded, did she not?

Buttercup’s powers are not merely restricted to characters in her own story. No, she has the capacity to reach right through the narrative frame and corrupt the hearts of those for whom she is supposed to be a mere character in a story.

And THAT my friends is precisely why you must fear this woman. Can you name any apparent chick-flick about which grown men have ever sung so many praises? How many self-respecting testosterone-poisoned grunt-brains have taken time away from a good wrestling match to tell you they actually like THAT movie, as if to suggest that this is the exception to their normal preferences. No, they haven’t succumbed to the power of the girlie-romance; it’s just that this movie is so damned good and so unusual that they cannot help but like it. The story of the Princess Bride is not really just another girlie-flick; it’s a romance movie that even men can love. That is what so many men want you to believe.

Take care, my friends! For, that is also what SHE wants you to believe.