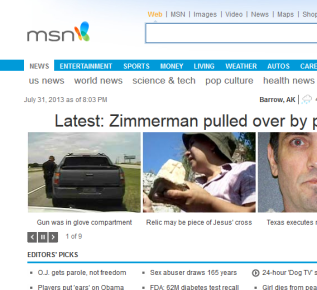 Don’t the folks at MSN know that I’m busy? Don’t they realize I have better things to do than rant about the slippage between their storylines and their headlines? Or is it some kinda clever plot to drive me bonkle-wozzies before the end of summer?

I mean, seriously, take a look at the teaser line for that story on MSN. Isn’t that amazing? No, not Zimmerman, silly, or the guy whose face I deliberately cut in half with the cropping tool (I’m in a bad mood); I mean the lady in the funny hat. Check out the line underneath it.

Somebody has reason to think they actually found a piece of the cross to which our dear and fluffy bamble-hussy was nailed in the way back when. And if that is true, then maybe a few other claims about that old carpenter’s cat might be true too, and damn! If that’s true, I guess I better re-evaluate a few things, not the least of them being the way I talk about our Lord and Savior.

Okay, I know it’s not really alleging proof of a miracle, but what the lie does suggest is that they have serious reason to believe a piece of wood actually dates back to the historical event of Christ’s crucifiction, and THAT would be a Hell of a piece of research to produce. It really would. 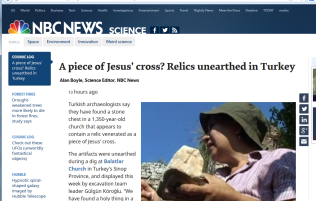 But wait a minute, the actual headline on NBC News doesn’t have quite the same force as the front page teaser on MSN. The teaser is just the sort of phrasing you would use to put a claim on the table; the actual headline could as easily be used to suggest you were getting ready to throw the claim in the trash. This whole thing just got less interesting with a single click of the mouse. Still, I wonder what the Hell this is all about.

Guess I’ll have to read the article…

Turkish archaeologists say they have found a stone chest in a 1,350-year-old church that appears to contain a relic venerated as a piece of Jesus’ cross.

It turns out that what MSNBC meant was little more than that they unearthed a artifact that WAS venerated as a piece of the old bad bark by a particular people in a particular time and place. The rest of the article discusses some of the comments thrown back and forth about such artifacts in centuries past, all of which is actually quite interesting, but what this piece does NOT contain is any reason to believe that it really is a piece of the most famous chunk of wood in human and (Divine) history.

Speaking of Icons, there is definitely an iconic relationship between the marketing of this article and its informative content, one that probably shouldn’t be there. Seriously MSN-NBCNews guys, it’s one thing to tell us about holy relic hyping; it’s quite another to hype a relic yourselves. …or at least those SHOULD be two-different things. The problem is at least partly a matter of slippage between the various stages of publication and promotion, but somewhere in there a potentially interesting story has been transformed into the rhetoric of carnival barking.

So, I guess this isn’t really the journalism-as-apologetics piece that the original teaser seemed to suggest it would be. Don’t get me wrong; this is actually kind of neat – in a perfectly-sober-professional-archaeologist-doing-what-those-guys-do sorta way, maybe even in a cool-find-and-high-fives-all-around-kinda-way, but definitely not in holy-carble-monkeys-you-has-found-the-holy-of-holies kinda way.

…one of these days I’ll go back to using real words in my posts.

Today I am just blowing raspberries at the whole damned thing.

Speaking of absolutely bunk, let’s try an online poll. This oughtta be about as meaningful as all the other junk polls you get with news stories. I only regret that it will probably fail to find it’s way into anybodies talking points.

CORRECTION: I took a second look at this and changed a few things (including the title) on accounta I still think it’s June of 2012. Thanks to John for catching my mistake.