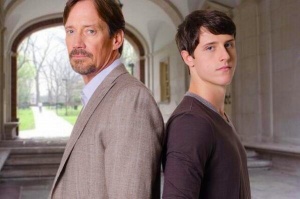 The most fascinating thing about the movie ‘God is Not Dead’ isn’t the conflict between atheism and Christianity; it’s the tension between narrative and argumentative styles of presentation. The premise for this film is simple enough; an atheist professor demands that his students sign a statement to the effect that God is dead. When a student refuses to do so, the professor commands him to prove that God exists in a series of 3 debates to be held in the first few weeks of class. Failure, it is clear from the outset, will mean an ‘F’ for the class, but the student’s only other option is to sign the statement. This a clash between Christianity and atheism to be sure, but its also a clash that takes the form of a debate, and the sort of reasoning that takes place in a debate changes a great deal when it is reframed in narrative form. In God is Not Dead, arguments become a story, and the premises and conclusions of those arguments become events in a storyline.

If the main characters appear as proponents in a debate between a College Professor (Jeffrey Raddison played by Kevin Sorbo) and a college student (Josh Wheaton played by Shane Harper), they are also antagonists in a life or death struggle quite familiar to movie-goers of all faiths and none. Josh is the underdog fighting for his faith; Radisson is a monster who torments his students without mercy. This is David and Goliath to be sure, but this time Goliath wields a grade-book, and David goes to the library. The David and Goliath aspects of the story are not an accident, and the film-makers were clearly trying to make a statement about the treatment of Christians in academia.

The opening scenes of God is Not Dead drive home just how important winning the debate will be to Josh Wheaton. In the event that he loses that debate, Josh will get an ‘F’ in the class, and (as his high-school sweetheart reminds him) that will be the end of long-term career plans. To make matters worse, she regards his willingness to risk his own future as a betrayal of the future they have planned together. She will thus leave him if he goes through with the effort. Josh’s pastor doesn’t help matters much by telling Josh his own actions may be the only exposure his classmates will have to Christianity. So, the stakes are awfully high. Just as David, Josh is fighting not only for his own future, but also for the good of his people (in this case, his classmates). This might seem like a heavy load to put on the shoulders of a college freshmen, but they would be quite familiar to many Christian apologists. This is not just debate over the the truth of a given claim; it is a battle for the souls of all involved.

So, this story about a classroom debate is really a sort of war-story. And of course it will be told in three acts. It should come as no surprise that the villain will be vanquished in the end, though it may come as a surprise just how completely vanquished (and yes, saved) this villain will be.

The first act of the story is largely about Josh’s decision to accept the debate in the first place. His preparations are unimportant, as is the actual argument he produces when the time comes. Josh begins this first round of battle with an argument to the effect that the Big Bang is consistent with, and even requires, the existence of a creator. Radisson simply tells him that according to Stephen Hawking it doesn’t, going on to ask if Josh thinks himself smarter than Hawking. Thus ends the first debate with an outcome that should surprise no-one. What kind of principle villain gets his ass kicked in the First Act of the story? Certainly not this mean-spirited professor!

Still, the first debate does establish a bit more than the fully expected set-back for our underdog Josh. Already, a few patterns begin to emerge from the vision of academic dialogue presented in this film. Both participants rely heavily on appeal to authority, even to the point of simple quote-mining. Both parties will also spend a significant amount of time on science, and in particular the science of cosmogony. The end result is a rather sophomoric vision of philosophy in which the battling heroes themselves pay homage to their own heroes in lieu of exploring the full arguments, all the while coming across as arm-chair scientists rather than participants in a philosophical exchange. To say that this is an impoverished vision of philosophy would be putting it mildly. To say that it is a vision common among Christian apologists would be putting it closer to the point.

In the second debate, Josh returns with a source describing Hawking’s own arguments on the origins of everything as circular. Pressed upon the matter, he reminds Professor Radisson that Hawking himself has suggested that philosophy is dead. Josh goes on to raise familiar concerns about abiogenesis in evolutionary theory.  Hawking was of course talking about precisely this sort of second-hand science discussion, but most importantly, playing the anti-philosophical card in this scene raises the dramatic significance of the debate. A humiliated Radisson has little to offer in response, opting instead to mock Wheaton after the other students have left the room. It is an angry confrontation, and in his anger Radisson reveals his greatest weakness. Asked by Josh, what happened to make him so angry, Radisson recounts the story of his own mother’s death and the prayers he offered as a twelve year old in the hopes she would live. This is an interesting speech, because it is one of the few times when the professor is allowed to be something other than a foolish caricature. He ties his own pain in the loss of a loved one to the outrage that some divine plan could ever account for it, and for just a brief moment Radisson seems both eloquent and human.

The final debate is all about the argument from evil, the notion that the existence of God as he is commonly envisioned in Christianity cannot be reconciled with the existence of suffering. Both parties advance arguments on the topic, but the most significant feature of this scene is the increasingly emotional tone of the discussion. Josh can feel the threat to his grade and his ambitions and Radisson can feel the growing threat to his own credibility. Their voices grow louder, and their demeanor more intense. As both parties become increasingly excited, Josh asks Radisson in front of the class to explain why he hates God so much knowing that science supports His existence. In the heat of the moment, Professor Radisson answers Josh in precisely those terms, proclaiming that God took everything from him.

One could chase ugly rabbits down so many holes in this film, but that single response from Professor Radisson really is the core message of the film. It is also the most disturbing thing about the film. For all it’s many simplicities and distortions, God is Not Dead is first and foremost a statement to the effect that atheism is really about hatred of God rather than disbelief.It is a statement that arguments against the existence of God (and counters to arguments in favor of His existence) are simply deceitful rationalizations. The argument from evil is, as this film would have it, less an argument about the (in)consistency of someone’s thoughts about God than an expression of hatred aimed directly at God himself.

In this plot twist, the very topic of debate simply vanishes in front of us, and the story sets all questions of god’s existence aside. Radisson is not really an unbeliever at all; he is a rebellious child (which might help to explain his childish antics). The storyline of the film thus overtakes any effort to address the issues at hand, presenting us with a narrative in which non-believers produce arguments only in the service of venting their own pain. One does not resolve their questions by rational rational argument so much as a kind of spiritual counseling. This counseling is presented still more clearly in one of the films many side-stories, that of a snarky atheist blogger who enjoys poking wholes in religious thought (…hey!). The script-writers must have found it quite amusing to pre-empt a decent portion of their future critics with this particular story-line, but to get back to the point, Amy Ryan (played by Trisha LaFache) learns that she is dying of cancer, a fact which throws quite a curve ball into her life of internet snarketry. When she finds her way backstage at a Christian concert, all of her arguments crumble quite completely as the drummer for the Newsboys suggests that she had actually come to their concert, not to mock them, but so so that they could help her find faith.

…and the subplot ends with a lovely group prayer.

The Newsboys concert fills the final moments of the film with enough exposition to compete with the worst papers from a creative writing workshop. It includes an appearance from Duck Dynasty’s Willie Robertson who cheers on Josh and invites the concert audience to send out a text telling everyone they know that God is Not Dead. This is a message clearly intended to break through the fourth wall and reach into the lives of audience members in the theaters. So I suppose it is no small wonder that evangelical Christians of all shapes and sizes were indeed pushing this film for awhile. I lost track of the number of people who told me that I really should watch the film, assuring me that even non-believers would find it thoughtful and enjoyable. Most seemed quite prepared to concede the one-sidedness of the story-line, even to accept that Sorbo’s character was a bit over the top (it was in fact, well out of earth orbit). What many of those urging this film on others seem unaware of is just how demeaning the story really is for those of us who don’t believe in God. It isn’t just that this film portrays an atheist in an extraordinarily bad light, or even that portrays academia in general as a place filled with cruel and sadistic professors just looking for an excuse to hurt those of faith. What this film does is to empower a dismissiveness that undermines any subsequent dialogue. It encourages believers to think of atheists (and skeptics in general) as people who do not understand our own motivations. It encourages Christian apologists to think of our words as unworthy of consideration, mere diversions from a spiritual tragedy which they understand and we do not.

It is a deeply dehumanizing vision of atheists that this movie presents. For me at least that vision is a conversation-ender; it is not the opening stages of a promising dialogue. As with so much of what passes for Christian apologetics, what is so unfortunate about this film is the degree to which it poisons its own well. In the end, this film does little to engage those of us who don’t share the Christian faith. It never really takes us seriously to begin with, and it never takes seriously the possibilities of dialogue between believers and non-believers.

Its fans should not be surprised to find many of us will respond in kind.

13 thoughts on “God, This Movie is Awfully Damned Trite!”