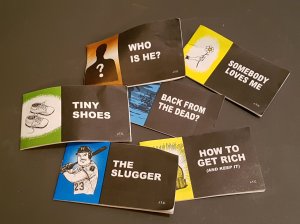 The God of Chick Tracts always struck me as something of an asshole.

I still remember the first time I encountered a Chick tract, but I can’t remember if it was the 4th or the 5th grade. I think I might have been hanging around after school for some reason. I do remember quite clearly that it was one of several that had been left scattered about the boy’s bathroom at my school.

This particular pamphlet contained a pretty generic story of a sinner who died and went to Hell. The pamphlet ended, as always, with a message of hope; we didn’t have to end as the character in the story did. Through Jesus we could be saved. In my charitable moments, I like to think that message of hope is the real point of these pamphlets, but frankly I think that might be giving a little too much benefit of the doubt. On that day it was clearly the message of fear that left its biggest impression on me. I remember the feeling of horror coursing up and down my spine as I read about the suffering of sinners damned to a lake of fire. The mere thought that this could be the world I was born into was enough to raise the hair on the back of my neck and keep it there. The suffering itself and the cruelty of the being who would inflict it stuck with me for days, as did the cruelty of anyone who could say of such a thing that the source of it was good and worthy of praise.

It’s more than a little fitting that my first encounter with a Chick Tract was in a bathroom, because my whole world got a little creepier that day and I don’t think it’s recovered since.

I grew up in a household filled with the ideas of Spiritualism and Theosophy, essentially the forerunners of modern day New Age thinking. I’d heard of people who believed in Satan. I’d heard of people who believed in Hell. In retrospect, I must certainly have known many who believed in the things talked about in that pamphlet, but I hadn’t ever really talked to any of them about it. What I heard of God and Jesus was all love and kindness, and so those who literally believed in Hell were (much like Hell itself) a remote possibility to me. To my family, such people were largely a whipping boy, an image of someone who gets it wrong conjured up mostly for the purpose of telling a story about how more enlightened souls get it right.

The Chick tract was the first time such people became real to me. They became real to me in the most caricatured form imaginable. On that day, the worst things said of organized religion by the adults around me had not come close to the pure malice of the story I held in my hands. Someone had left this with the intent that children would find it and read about it. Whoever that person was believed quite firmly in Hell, and they believed in it strongly enough to want to share that message with others.

It didn’t escape me that the chosen mode of delivery was less than honest. Leaving pamphlets in a children’s bathroom is more than a little underhanded, and this fact was the icky icing on a whole cake of ugly. So, there I sat with this pamphlet, trying to wrap my mind around the twin horrors of this vengeful God and the fact that some people actually do believe in Him, and whats more that they love him. Suffice to say those horrors outweighed the significance of any hope the pamphlet might have had to offer. The vision of Jesus might have been the end of the story, but it’s most memorable moment for me (and I suspect others) had clearly been the lake of fire.

Could the world really be so perverse? Could people really be so morbid as to think this way? Those are the questions I kept asking myself after encountering that first Chick Tract. It’s all I could think of for some time afterwards. Eventually, I managed to put the whole thing behind me, but not entirely. It was a bit like some of the dirty stories my friends were beginning to tell at that age, or images of odd porn that somehow crossed my path. I hoped one day to make sense of all these things, but for the time being I found them simply disturbing and I preferred not to think about them much. To me, that pamphlet had always been a kind of pornography.

I understand the author of that pamphlet, Jack Chick, has recently passed away, and it reminded me of that day back in school. I don’t wish to celebrate his death, but I’m also quite aware that his passing will stimulate a surge in public interest regarding the man and his work. I take no pleasure in his passing, but I do think his life’s work is worthy of a comment or two, critical as mine most certainly will be.

The next time I had cause to consider Jack Chick’s particular brand of pornography came in the mid 80s when I and my friends took to playing Dungeons and Dragons. “Dark Dungeons” would be Jack Chick’s main contribution to the Satanic panic of the era. I don’t recall when I first became aware of it, but the story-line always struck me as both laughable and deceitful. I didn’t really become fully aware of Jack Chick himself (or of his operation) until I joined a few discussion boards back in the early 2000s. It was odd to me, a bit like learning the name of a creepy caller. This was the man who had written that story from back in my childhood. He was the author of those morbid images, and he was the source of that sick feeling I had upon seeing them.

…but also a little disconcerting.

I recall only one other Chick tract with any degree of significance to me. It was about Navajo Medicine Men. Chick portrayed them as Skinwalkers, thus conflating healers with monsters, and of course ending the whole matter with a familiar pitch to Jesus. It was no more insightful than the hack job Chick did on D&D.

I’ve encountered a few more of Chick’s pieces over the years, but not many have really stuck in my memory. The formula is simple. Some worldly interest will lead a person down a very dark path toward Satan, death, and Hell itself, but Christians will offer them salvation. In the end, the reader is invited to accept Jesus and be saved. I understand others have been doing the work for sometime now, but the essential formula remains largely unchanged. I always wonder at the choices Chick and his successors make in these stories. Do they really believe the details of their claims? It’s one thing, for example, to believe that Dungeons & Dragons is a bad influence on kids, and quite another to believe that it is literally run by a cult as a means of initiating children into arcane magical rites. This is what fascinates me most about such work today. It isn’t testimony to faith, but rather the myopic interest in sordid stories about actual people real world world institutions. What kind of mind spreads stories like this? And how did they decide to produce them? With or without evidence, I can’t help thinking the bottom line is the same. Someone is getting off on these narratives. Whatever their interest in selling the hope of Jesus, someone is reveling in the vision of sinfulness a little too much.

Don’t get me wrong; I have no particular reason to condemn anyone for pursuing their prurient interests, at least if you can do it without harming anyone. What bothers me in this instance is the bad faith and the lack of self-awareness, the sense that someone could play so happily in the very imagery they seek to condemn in others. Perhaps more to the point, what bothers me about Chick Tracts is the sense that this is a pleasure taken in sordidness of others’ lives, a kind of hope that other people might really be worse than you could possibly know, and of course a hope that they will suffer in the end. This sort of thing is not unique to Chick publications, unfortunately, and one can often find preachers indulging in a kind of proxy porn. I suppose that was Chick’s particular genius. He found a particularly vivid way to present that kind of material. Whether that is to his shame or his credit is of course another question. For me the answer is clear enough.

I wish I could find something better to say about Jack Chick than this. It is of course tempting to follow an age old wisdom and say nothing at all, but Chick’s passing reminds me of that moment all those many years ago in which I first found one of his publications. Don’t get me wrong. Worse things have happened to me than the discovery of that creepy pamphlet. Even still, I can’t help thinking it wasn’t a particularly positive experience. For me, that will always be Jack Chick’s legacy.

It isn’t a good one.