If you are traveling around the four-corners, you might think your best bet for a map would be one covering one or more of those states.

That seems right, doesn’t it?

Don’t give me any flack about phones and GPS systems. I’m old damn it! I use maps.

Well, it turns out my friend Ken Ascher also uses maps, and he just gave me a quick lesson in how to choose the right map. …at least for the four corners area. You see, he was looking to find Tsaile, which happens to the location of the main campus of Diné College where I used to work.

Ken got a AAA map for Arizona and New Mexico and looked and looked. This (just below) is what he saw. You can look and look yourself, but you won’t find it. Tsaile just isn’t on that map. Oh, the little part of the map that I included in that picture does indeed cover the territory that includes the little community of Tsaile, but no, you cannot find Tsaile on that particular map. 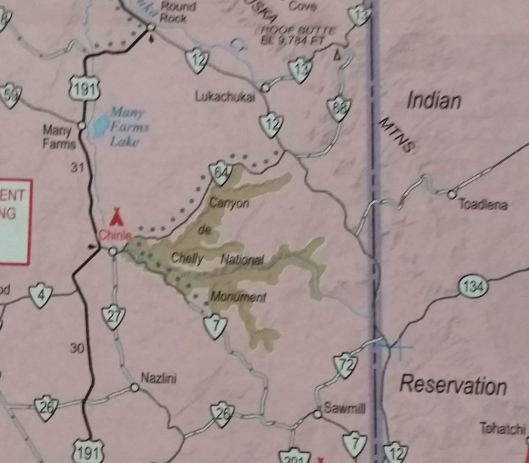 You can stop looking now, it’s not there.

Luckily, it turns out that AAA has a different map for “Indian Country” in all four of the four corners states. It isn’t as detailed, but its purpose is to highlight the features of Indian territory. And thus Tsaile makes an appearance on this map (near the upper right hand corner). Yes, it does. See, it’s right there.

Having seen it here in the “Indian Country” map, you can even pop your eyes back up to the map above and see where Tsaile should have been. No, it’s still not there. You can see where it should be, but it’s not there.

The issue doesn’t seem to be resolution. The Arizona and New Mexico map has a higher resolution than the one for Indian country. I somehow doubt that anyone hatched a plot to hide Tsaile from Ken. My guess, is that the criteria for selecting what to put on each map simply differs, and that the difference was enough to make Tsaile disappear (along with quite a few other things, actually). Luckily Ken found the other map and then found his way to Tsaile.

Okay, so this probably isn’t one of the greater injustices to occur in the all-too sordid history of Indian-white relations, but surely there must be a moral somewhere in this story. It might be just to remember that you can get a separate map for Indian country if your traveling through the area. It could also be that you should get as many maps as you can possibly find, so that you can check them all. Hell, it might even be that you should use your telephone GPS, but that way lies madness!

Frankly, I think the moral of the story is that I’m out of ice-cream, which may seem irrelevant to you, but you aren’t the one jonesing for it right now.

That aside, I’m going for the “get the Indian Territory map if that’s where you’re going” moral to this story. If you want to find your way around the reservations in the four corners, you’re going to want that map.

And with that I’m off to dream of ice-cream.

…or better yet frybread!

10 thoughts on “A Map is Not a Territory. …and Sometimes It’s Not Even a Map!”