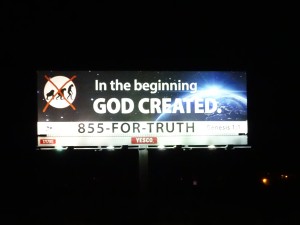 Saw this in Cedar City this summer (I think Moni took the picture.)

Atheists can’t provide a sound basis for their morality.

…it’s the kinder gentler version of “atheists can’t be moral,” which is a common theme among Christian apologists. To be sure, some folks go back and forth between the two messages, but at least some apologists do seem to keep a clear distinction between the claim that atheists cannot be moral and the claim that whatever morals we may have, we simply cannot justify them in rational terms.

Some folks express this position in the form of an architectural metaphor; we have no foundation for our ethics, so the argument goes. Alternatively, we cannot ground our moral principles in a sound basis of judgement; our morals aren’t based on anything objective, and so on. The sheer physicality of this rhetoric is always striking to me.

Still, I can’t help thinking some of those using this language could stand to think about those metaphors a little bit. It would be nice if they at least recognized them as metaphors. As often as not, I suspect many of those producing such messages take these terms rather literally.

All that aside, lately, I’ve been thinking about this less in terms of the argument at hand and more in terms of the narrative about that argument. Questions about the nature of morality go back a rather long way in the history of western philosophy, to say nothing of countless other contexts in which people could ask about what people ought to do and whether or not they can provide a sound reason for their answer. This is not just one ongoing debate; it is many, and while that debate rages on with no likelihood of a clear winner, this story of the unique moral failure of atheism flourishes in its own right. The notion that atheists can’t provide an adequate account of the nature of morality may be a contention to be argued in select circles. It can also be a story told about the difference between us and them.

This theme reminds me of a time a college friend took me to see Gary Habermas speak at his church. Habermas is a renowned apologist, so I was expecting to hear an interesting argument in favor of Christianity. Suffice to say that I didn’t. I don’t know how to convey just how unimpressive Habermas was on that occasion. I could hardly believe my ears. To this day, I wonder if I missed something important or if Habermas was just having an exceptionally bad day? I don’t know.

The whole performance got a great deal more interesting though after Habermas stepped down, and the regular pastor for this church took a moment to add a few thoughts of his own. The pastor himself struck me as a fairly nice guy. I couldn’t help but like him, but there I sat listening to him try to put Habermas’ presentation into perspective for his audience. What impressed the pastor was the notion that someone could field a complex and sophisticated argument in favor of the Christian faith. He ended his own comments by saying how good it felt to know that people of intelligence could defend the faith, that smart people did in fact believe in Jesus and that they could justify that faith.

So, there I sat thinking on the one hand that Gary Habermas might be a smart guy, but we sure as Hell hadn’t seen anything to prove it on that particular day. More importantly, I couldn’t help noting how much had been lost on the pastor. He had nothing to say on the topic at hand, or the arguments Habermas had made, nothing at all. The mere fact that Habermas had fielded an argument in favor of Christianity was what interested the pastor. Such an argument did exist, and its existence was a comfort to him. It should also, he thought, be a comfort to others attending his church.

This is what I mean by the narrative value of the argument. Habermas and people like him continue to make their arguments, and people like me continue to be unimpressed by them. Still, the arguments seem to hold a value in believing circles, a value almost entirely unrelated to the soundness of the arguments themselves, much less the impact of those arguments in contested circles. An apologist may fail to engage unbelievers entirely and still count as a success in believing circles. For some, it is enough to know that smart people defend the faith.

Toward what end is another question.

So what? Conflict is a common source of good narrative material, and conflict over religious beliefs is no different. We unbelievers have been known to tell a story or two out of season ourselves, but I don’t think we’ve established quite the market for selling to the non-choir, at least not yet. A few unbelievers may be working tales of battle into a profession of sorts, but we are generations behind the business of Christian apologetics. So, our narratives are generally more fluid, the pay-off less certain, and the likely consumers for such stories less obvious. When an atheist fields an argument against a believer, it is still reasonably likely that the believer is the actual person we are trying to communicate with. Christian apologetics, by contrast is full of people framing arguments in terms of a confrontation with unbelievers only to produce them for the benefit of other believers. It is in effect a business aimed at producing stories like those told by the pastor above, stories of reassurance.

Let’s come back to the notion that atheists can’t justify our own ethical principles. What does this contention provide when it’s construed in terms of narrative themes? I think the payoff is very clear, namely in the implied contrast. If we non-believers can’t justify our moral principles, so the argument seems to suggest, those who believe in God can. As much as people working this argument may be trying to tell us about the failures of unbelief, they are also claiming a victory for theism, or at least for specific variations of theism.

What is wrong with us, so the story goes, is we cannot justify our moral principles. We may be moral people, but our morality is lacking something, and that something is important. Don’t get me wrong; this story a damned site better than the argument that non-believers are inherently immoral, but this particular concession that we are moral without a sound reason damns us with faint praise.

What’s so infuriating about this is the difficulty of the issue. It really is very difficult to establish a rational justification for ethics. We can often establish reasonable connections between certain basic value judgements and more specific propositions (Kant’s categorical imperative could be used for example to suggest that one ought not to lie to someone else as that would entail reducing them to the status of a means to an end), but providing those basic value judgements with a non-circular justification is damned difficult. I won’t say it’s impossible, but it’s certainly difficult, and always subject to contention. Is morality deontological or consequentialist? Universal or some variety of relative? These are all pretty difficult questions, and belief in a god simply doesn’t provide an obvious solution to any of them.

When apologists pretend that atheists are uniquely unable to handle the matter, it always strikes me as a rather premature declaration of victory. As often as not, they seem to confound two or more sub-themes in these discussions. When for example a theist claims their oral principles are objective because they have been mandated by God, I find myself at a loss for words. Even an ultimate subject is still a subject, and a morality derived from the will of a subject, even an ultimate subject, is still a subjective ethics. …unless of course one can demonstrate that the subject (God) has Herself based her judgement on something objective. Or perhaps, there is an objective reason why we as subjects are obligated to do what God (that uber-subject) wishes, but that would be stretching the meaning of objectivity a bit thin. I can certainly understand someone expressing skepticism at any of the attempts to establish an objective or absolutist form of ethics, but atheists simply are not uniquely implicated in this problem. I’ve known Christians who handle this issue very well. They are not among those proclaiming to failures of atheist ethical theory to the faithful in their churches.

In the end, I think this theme has two significant practical implications:

First, it reverses the point of morality, at least for purposes of the narrative in question. One might expect that the value of ethical behavior would in some sense be found in the behavior itself. Those hawking the notion that atheists are unable to demonstrate a sound basis for our moral judgements are, in those moments at least, shifting the focus of the work at hand. They are in effect, presenting the intellectual justification for morality as an end in itself. The point of morality is in such stories a bit intellectual exercise. I might do right by my neighbor, so the story goes, but I don’t really know why I should do so.

And thus doing right by my neighbor becomes just a little less important.

Second, this theme seems to produce a kind of moral hierarchy. There are those of us who do right, so the story goes, and those who know why we do right, or at least why we should do so. I suppose it shouldn’t be a surprise to see this kind of division of labor appearing as a theme in apologetics, but it is fascinating to see the way it takes shape in this rhetoric. The authority of the faithful seems to colonize the world at large in these stories, and those of us who are merely moral (at best) are just a little less than those that know why we should be so. Our actions are just a little less significant than those who claim to know the objective basis for moral principles. We can say no, as I surely do, but that’s to be expected of us. The faithful know.

But of course this isn’t simply a claim to authority over the rest of us, and it isn’t even a claim that privileges the perspectives of priests and pastors, much less the avergae everyday believer. It is a claim that privileges the perspectives of apologists. Simple pastors like the man I mentioned in the story above can do their best, but it is up to the smart people who defend the faith to do the real work of ethics. The rest of us, believer and unbeliever alike can be moral, sure, but our morality will always be missing something.

Which of course makes Christian thought into a rather esoteric enterprise.

And no, that doesn’t strike me as a good thing.

24 thoughts on “Good Without an Apology”