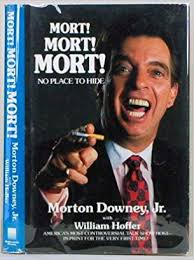 I always thought Morton Downey Jr.’s cigarette would make a fitting symbol of the modern Republican Party. I remember seeing him blow the smoke into the faces of liberals he would bring on his show to shout at. I remember him using that cigarette as a symbol of defiance, a misguided token of individual freedom standing strong against a world of oppressive liberalism. The dangers of secondary smoke had finally sunk into the public’s mind, and people (not just liberals) were beginning to protect themselves from it. With Americans putting up ‘no smoking’ signs in institutions all across the nation, Mort smoked like a chimney just to spite them. He shared his smoke with others whenever he could, at least when the cameras were rolling, and this obnoxious act of self-destruction, discourtesy, and outright assault helped to define him as a ‘conservative’ voice in the ever more carnival circles of right wing politics. He became a shining star of right wing politics, for a time, riding a wave of support with a cigarette in his hand.

And then of course it killed him. 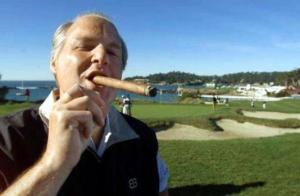 As I recall, it was Rush Limbaugh who replaced him when Downey got himself fired from a radio gig in Sacramento California. Rush also replaced Downey in his role as the most prominent right wing loud mouth. Rush got to keep that role way longer than Downey did, and he accomplished way more with it too.  Rush substantially transformed ‘conservative’ politics in the age of Clinton (or more to the point, Newt). Through Rush Limbaugh, bigots and bullies everywhere learned to call themselves ‘conservatives,’ and through Rush conservatives learned to lean less on the authority of age-old traditions and enjoy the role of petulant children defying the authority of liberals whenever and whenever possible. Where old-school conservatives would invoke timeless truths as though speaking with an ancient voice, Ditto-heads mocked and sneered like the slackers from the back of the classroom.

Limbaugh also took on the role of the public smoker in chief. I don’t recall seeing him blow smoke in anybody’s face, but then again, I don’t recall seeing Rush ever spend much time in the company of those who didn’t share his childish pseudo-conservative politics. What I do remember is countless images of him with a cigar in his hand or in his mouth and a smug look on his face. He too wanted us to know that we couldn’t stop him from smoking. He too wanted everyone to know that we couldn’t stop him from killing himself. He was enjoying his personal freedom and there wasn’t a damned thing we could do about it.

And of course he was right.

At least he got a Medal out of it.

It isn’t merely that these two clowns have smoked themselves into cancer. Were that the case, I really would consider it their own business. No, what makes this all a matter of public concern is their use of tobacco in fashioning their own self-image. Both used smoking to symbolize right wing politics, to cast their own personal dances with death in the guise of rebellion and to cast efforts to combat the tobacco industry as just so much arrogance by the left. Just as Mort before him, Rush minimized the threats of secondary smoke. He too denied the health risks that smokers impose on others as well as themselves. Limbaugh too celebrated a known health risk on a regular basis, and he too turned it into a disingenuous symbol of rebellion against authority.

To hear these professional morons speak, American smokers had become freedom fighters and accomplished healthcare professionals become just another form of meddlesome liberal out to take your freedoms.

Sadly, this is hardly an unusual feature of right wing politics, not just the self-destruction part; the taking the rest of us with them part as well. From pollution controls and safety standards throughout industry to the flagrant refusal to address climate change, right wing pseudo-conservative politics embraces countless risks to human health and happiness. They flaunt the half-based idiocy of Sunday-Morning Scientists in answer to the work of dedicated scientific professionals on countless issues of public policy. They consistently do so in the name of personal freedoms and stories about confrontation with left wing authoritarianism.

These fuckers will one day kill us all.

Mort’s cigarette and Rush’s cigar really are perfect symbols of what American ‘conservatism’ has become.

6 thoughts on “A Cancer of Freedom”