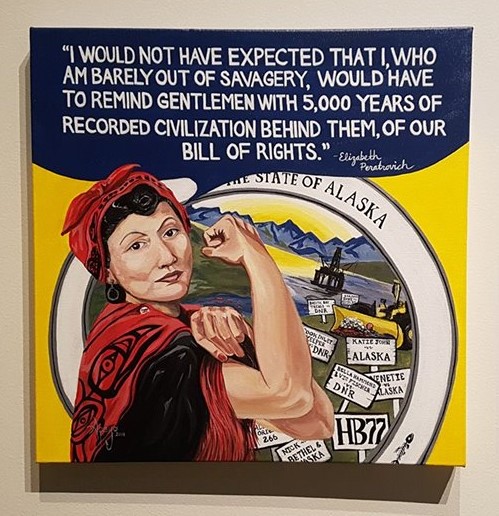 Rosie the Riveter is one of those proverbial gifts that just keeps on giving. So, was Elizabeth Peratrovich. She would have been a contemporary of the many women who inspired this icon, which makes it just a little more interesting to see her standing in here for the women (whose real name was Naomi Parker) most of us envision when thinking about Rosie. This poster is part of the Unsettled exhibition currently showing at the Anchorage Museum.

Elizabeth was a major figure in the movement to combat discrimination against Alaska Natives in the 1940s. She is memorialized every February 16th, the day in which the Alaska Territorial Government signed the Anti-discrimination Act 0f 1945 into law. You can learn more about her work on civil rights at Alaskool.org. The quote featured in this poster is commonly thought to have been part of her testimony at the Alaska Territorial Legislature during hearings over the Anti-Discrimination Act. It isn’t entirely clear whether or not these were her exact words, though it probably says something about her actual testimony that it has become something of a legend in itself. The wit would certainly be right at home with other things that Elizabeth clearly did say.

Apayo Moore, the artist behind this particular piece has the following to say bout it: