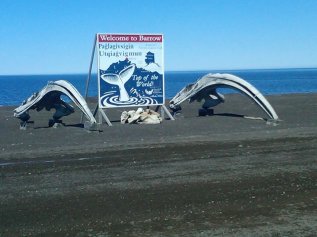 One thing about coming to Barrow, it has made conversation much easier, at least in the lower 48. All I have to do is tell people I am from Alaska and the conversation is well on its way. They will ask more questions than I could possibly answer, and once I start telling them about Barrow I can generally be assured of willing and sympathetic audience. I’m a socially awkward kinda guy, so yes, this is a good thing. Anyway, I’m happy to talk about my new home. Barrow can be damned interesting!

…so I suppose it should come as no surprise that this town has made its way into the occasional television show or movie production. Three particular movies about Barrow seem to have made it into the popular culture to one degree or another. These films couldn’t be more different from one another. Each tells a different kind of story to a completely different audience, and each portrays the community of Barrow in a very different way. I’m always fascinated to see the community change its shape in order to meet the needs of the film-makers behind these project.

…fascinated enough to write a post about it anyway! 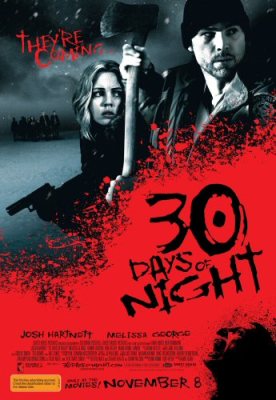 Barrow as Darkness: Thirty Days of Night is of course the most well known movie about Barrow. In this film based on a graphic novel) vampires descend upon the town at the outset of Polar Midnight in order to enjoy a month-long feast in the safety of a season without sun. Thirty Days of Night wasn’t filmed here; it was filmed in New Zealand. Still, the central premise of the film is very much about Barrow and the dramatic significance of a long polar night.

The small hills and valleys of the movie’s opening sequences were about all it took to shake my sense that this film had much to do with the Barrow in which I live. The exaggerated sense of polar midnight didn’t help either. Once it goes dark in this film, it stays dark, …completely dark. What a lot of people don’t realize (and what the film-makers didn’t seem to find interesting) is the fact that we get a kind of fake sunrise here. If you can imagine the moment before the sun actually rises, that’s what we get in the midst of polar midnight, only it isn’t followed by an actual sunrise. You could swear the big ball of warmth was just about to pop over that horizon, and then the light just starts to fade.

…yes, it can be a little disappointing.

But perhaps I am being too harsh. Barrow does one thing only for this film and that is to provide the central premise, a vampire paradise. So, it should come as no surprise that the movie makes no attempt to convey anything meaningful about the people of this community. Still, you would think the directors would be kind enough to give their villainous horde of undead a bit of variety in their diet? Nope. The  Barrow of this film is a lily white community if ever I saw one before. As I recall, a token native does make an appearance in the living feast that is Barrow’s population for this film. Other than that, the menu is white meat only.

This is a fun film in its own right, but it is definitely, not the Barrow I know.

Barrow as a Big Warm Hug: Hollywood has made one popular film here in Barrow, and they did it since I arrived, The Big Miracle. At least it was about Barrow, and they did shoot some film up here. Some residents even made it into the movie, as did natives from other parts of Alaska. With a cast featuring Drew Barrymore and Ted Danson, this film recounts a real event in the history of this community. In 1988, three grey whales became trapped in the ice not far from here. The entire town as well as a number of outsiders (including a Russian icebreaker) worked hard to break them free.

The ironic thing about this movie is that it was based on a rather cynical book, ‘Everyone Loves Whales’. I gather the original script may even have had a little bite to it, but the final cut of this film is a feel-good celebration of compassion, humanity, and …whales! By the end of the film, the plot is fully focused on efforts to save the big lugs of the sea, but the early scenes focus on political questions about whether or not anyone will help them. One of those questions was apparently whether or not to eat the whales instead of saving them. The Iñupiat community of the north slope harvests Bowhead whales every year, so that possibility could hardly be described as a stretch. This plot point is eventually resolved when the whaling captains of the town decide instead to help free the whales.

The eat-or-save sub-theme provides The Big Miracle with its main window into the community up here. Unlike Thirty Days of Night, this film actually finds a place for the Iñupiat community of Barrow in its storyline. They start out as potential villains and end up being god guys in the end.

…kinda like Clint Eastwood, only with chainsaws and snow-machines instead of Colt Walkers and a horse. (Let’s not talk about the harpoons.)

Folks up here are of mixed minds about how whether or not the film does justice to Iñupiat community of Barrow. Drew Barrymore (who plays a Greenpeace activist in the film) gives a pretty brutal speech about the native community and its whaling practices, and its hard to shake the sense that some of her points in that speech might have served as the voice of the film-makers. Later attempts to show the native community in a more positive light may or may not be enough to settle concerns about the politics of the movie, and for those here still very much committed to whaling, the major theme of the movie itself may be a little discomfitting. Barrow’s native community gets some love here precisely to the extent that their actions do not reflect what natives of the North Slope normally do with whales. It’s a conditional kind of love, and I can’t blame folks for being wary of the conditions.

For what it’s worth, this movie at least knows that natives exist in Barrow. It even kind-of likes them, so long as they aren’t eating muktuk. 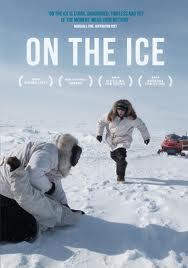 Barrow as Native Youth: I can think of one REALLY good film set in Barrow, and that is On the Ice by Andrew Okpeaha MacLean. MacLean is from Barrow, and he uses the film quite deliberately to tell us something about life here at the top of the world. On the Ice tells the story of two young Iñupiat men with a secret they’ve been concealing from the rest of the community. And while this main story plays out, the film does a wonderful job of revealing the interplay between indigenous values and outside cultural influence in the native youth of this community.

On the Ice is a tense drama, and one which portrays the native community with a deliberate sense of realism. This film was shot in Barrow, and it features a number of residents in the supporting cast. It’s both amusing and a little disconcerting to see scenes on street corners I pass regularly, and even more so to see people I know in various scenes, but that is definitely one of the film’s charms. If the other films are set in Barrow (or at least an imaginary version thereof), the real Barrow jumps right out at you from this film.

…at least it does for me.

What’s missing from On the Ice is everyone else! …besides the Iñupiat community, I mean. Every once in awhile you can catch a glimpse of a non-native somewhere onscreen in this film, but that is definitely the exception. For the most part this film has eyes only for the native population. Gone are the white folks, yes, but so are the Koreans, the Thais, the Tongans, the Samoans, and the Filipinos, each of whom has a substantial place in this town.

On one level, fair enough. This movie is about native youth not the rest of us. On another, it’s a simplification, perhaps even an over-simplification. I can’t help but think it makes a difference that the outside influences (and the people who represent them) are present here in Barrow itself, and I would think that would be part of the story of native youth, at least if that story is to be a realistic portrayal (perhaps it is not). It would have been interesting to see how these characters dealt with ethnic relations over the course of the story. Leaving out all the sub-communities from the town simplifies the storyline and that is the one thing that jars me a bit when I watch it. But seriously, I mean to praise the film with faint damn. Because what this film does, it does well.

If you want to watch a movie about Barrow, this is the one.

So there it is. The community in which I live takes on radically different forms whenever a camera is pointed at it. It is darkness for those seeking a fright, a reluctant helper for those seeking a heart-warming smile, and in it’s best incarnation to date, it is an all-native community. The full community of Barrow never seems to make it into these stories, and the interplay between all the ethnicities of this town has yet to make it onto the big screen.