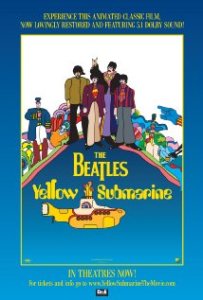 I think I was about 9 when I watched Yellow Submarine. I didn’t know much about the Beatles at the time. I remember a bunch of 45s my older brother kept in a case with a zebra pattern on it, and I remember a walrus picture and the associated lyrics had made quite an impression. Beyond that, …well I was nine!

But there I sat watching Yellow Submarine on TV with my sister and her friends. Blue meanies made a strong impression, as did something about a hole that ended up in Ringo’s pocket. I remember being very confused about that.

I also remember quite a few songs, and then there was a scene where someone tells Ringo not to pull on a lever, and he says “I can’t help it. I’m a born Lever-puller.”

University of Whales I don’t remember, but I read that line and it looks funny.

So, one day I’m lying in bed one morning at the age of 23, and I’m thinking about speaking accents. I do accents sometimes, …terribly. Anyway, I’m thinking of British accents in that half-asleep state that might just as easily slip back into a full dream, and I’m pretty sure I can do Ringo’s accent, and then …

Guess I can be a little slow sometimes.