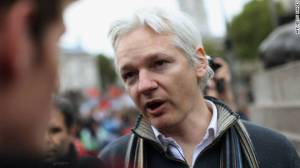 Yes, this is the photo they used as well.

I don’t have a lot to say about this news story, but it’s worth a look. …a look at the three paragraphs that CNN devotes to the stated topic of the article before reverting to a bog-standard narrative about Wikileaks and the legal troubles of Julian Assange.

I suppose we could learn a thing or two about media bias here.

– Perhaps a bit about the limits to the oft-cited left wing bias of the media, which is certainly true for a certain range of issues in the culture wars of the U.S. That bias quickly reverses course when substantial features of the world political economy are at stake. Wikileaks does far too much to threaten those interests.

…which is why the topic makes a much better sex scandal.

– There may also be a lesson in here about the way that news stories get their titles. Seriously, you click on a link to an article entitled; “Wikileaks Releases 2.4 Million Syria emails,” and you get a story about its founder’s legal troubles. It isn’t all that uncommon, and the author may not be at fault. Still someone is responsible for this. Someone chose to run a story under a false flag. And that someone ought to get noogies from his boss every morning for the rest of July.

…unless, it is the boss. Then he gets Indian burns.

– Or perhaps there is a lesson in here about editing? Who knows what interesting information might have been in the original piece. The 3 paragraphs on the initial topic certainly hint at interesting and juicy information, shortly before reverting to old news. I think there is a pretty good chance there was something worth reading in that original story.

…and I wonder if they will ever let us read it?

– And most of all, I suspect what we have here is a story about the economics of news reporting and the growing tendency to regurgitate the same old shit, all the while calling it news. It will take time and work to sort through the Wikileaks material, and it will take some knowledgable folks to do that. Why put out that effort when you could just take some old stuff about a long-running story and slip it under the sexy new title about a genuine news development?

But hey, I’m sure that with good sound journalistic practices like this, CNN will quickly put the whole Supreme Court ruling fiasco behind them! And seriously, this may be yet another extension of that story. Is the misleading title an attempt to finesse the issue of time, a means of holding off the story while they look over the material? Possible.

Please pardon me now. I’m off to see if I can find someone who actually did a story about the Syrian email leaks.