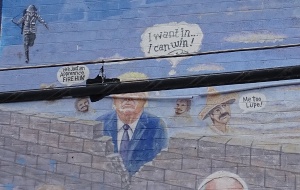 “When trolling douchebags, take care not to become a douche yourself.”

I’m pretty sure that’s a direct quote from Friedrich Nietzsche. I’m almost certain my man Friedrich was talking about Trump when he wrote that. He was trying to tell us to be careful how we criticize Trump, because Trump is full of idiot and when you argue with idiot, you get idiot sauce all over you.

Make a note of that Hillary!

“Cereal?” You may be asking, but I can assure you that Nietzsche was totally cereal with all of this stuff, cause the man was a totally cereal kind of guy.

…at least about how you should argue with Trump. Or with the idiots who support his Trumpery badness.

Nietzsche’s point of course was that you really should watch what you say about Melania Trump. I know this, because I asked him. I asked Nietzsche straight up. I said; “what do you mean dude?” And he told me I shouldn’t really call him dude. He said Zarathustra would not approve. He then told me the whole damned quote was actually about Melania Trump. He wanted us to know that people should watch what they say about her.

“Surely, you don’t mean,” I said to Nietzsche, “that we can’t criticize her for plagiarizing Michelle Obama in her speech at the GOP convention.”

I thought he had a point.

Nietzsche added, that you could probably criticize Malania and the whole Trump camp for pretending Obamas are the Devil himself when they actually seem to find some merit in what at least one of them does.

I asked Nietzsche if the devil has multiple personalities. He said only when he’s from Kenya. That’s all Nietzsche was wiling to say about that subject, so we moved on.

I asked the old philosopher if we could criticize Melania for saying she graduated from a place that never spat a degree her direction. He said, surely we could. I also asked Nietzsche if we could raise questions about her immigration status when she came to the country. He told me that was probably okay, but it would really depend on the questions. Did we really want to encourage Trumpery people to think of immigration as a bad thing? I agreed that might not be wise.

“So what’s the big deal anyway?” I asked the old curmudgeon. “What is it we are not supposed to say about Melania?”

“Oh, you can say anything you want.” Nietzsche assured me. “Without gods, everything is totally cool.”

“So then what’s the problem?” I asked again. “Can we go after Mrs. Douchebag or not?”

“Of course you can, but if you go about it wrong, you will become a douche yourself. You’ll be talking along, or tapping away at your keyboard and suddenly your mouth and your fingers will be the mouth and fingers of a douchebag. If you’re cool with that, then it’s all good. But if you don’t want to become a douchebag, then you should watch what you type about Melania.”

I told Nietzsche that I really didn’t want the mouth and fingers of a douchebag.

“Well, then take care of what you type!”

“Okay!” I was getting a little exasperated at this point. I mean, Nietzsche may not be a systematic philosopher, but this was a little cryptic even for the proto-gonz himself. “What exactly is it that I might not want to type about Malania.”

I have to admit, I was a little taken aback by this whole thing. I mean, I really didn’t expect a conversation with Nietzsche in the first place, but nobody really expects that. What I really didn’t expect was that slut-shaming would be his biggest concern about election politics in the U.S. Maybe that wasn’t his biggest concern, but that’s what he chose to tell me at any rate. It really seemed to be the main point of the conversation.

“Why?” Nietzsche asked, “Why would you go after her anyway? Hasn’t the man himself given you enough cause for complaint to fill countless servers with perfectly sound criticisms? Does the image of Trump himself not make you want to claw your own eyes away from your face? Does his voice not make traitors of any ears foolish enough to pass along the sound of it? When you have Trump University, why would you bother about Melania’s degree? When you have Trump saying stupid things on a daily basis, why would you care if Melania chooses to channel Michelle like some drunken psychic who mistakes a radio for a ghost? Sure, you can make some good points about Melania, but the real story is always going to be the festering bloodfart beside her. Why on earth would anyone take the time to score a little field-goal against Melania, when you could score a game-winning touch-down against Trump himself? He’s the candidate for POTUS, and he is way worse than his wife will ever be? He’s worse than anyone’s wife will ever be. Hell, the Donald is worse than worse. He’s a singularity of worsitude? There is absolutely no reason to cap on Melania when her husband himself is such a bundle of dumbfuckery that the heavens themselves have been screaming “you’re fired” ever since his campaign announcement. Seriously, you have to ask yourself, why anyone with that much material on the Donald would instead choose to go after his wife? That just smacks of misogyny.  I’m saying that, and I’m a notorious misogynist.”

“That’s true,” I said. “Your writing about women is pretty bad. And when did you start using football metaphors?”

“When you decided to write me into this damned blog post.”

He had a point.

I’ll spare you the rest of the conversation. Nietzsche was getting a little belligerent at that point. Also his Superbowl predictions seem a little far-fetched to me. Really, you just don’t want to know.

My main point, Nietzsche main point, is that one ought to think twice about attacking Trump through the use of Melania’s nudie pics. It’s become a rather common game on certain social media circles. Some people like to circulate racy photos of Melania Trump along with a comment or two about how she could be our First lady. Yesterday the hashtag #TrumpsMexicoTripSayings even had someone suggesting a donkey show for Melania, thus mixing racism with misogyny. It’s an ugly argument, and one that doesn’t do a damned thing to show just how bad Trump would be as a President.

The problem here isn’t really fairness to Trump, or even Melania. Neither Melania nor Donald will suffer much as a result of such idiocy, and these memes aren’t going to cost him the election, but the notion that a woman deserves punishment for her own sexuality is toxic as Hell. It does hurt people. Maybe not the wives of billionaires, but it hurts people just the same. An objection to commercial nudity is also pretty damned hypocritical when coming from people who consume such images themselves, all the more so for those spreading such images while criticizing Mrs. Trump for appearing in them.

With enough mental gymnastics, you could probably concoct a respectable-sounding argument about the topic, but at the end of the day, you are still using a woman’s body to attack her man. That way does lie douchebaggery. Nietzsche is right about that.

So, anyway, that’s what Friedrich Nietzsche has to say about this election. I asked him if I could share his thoughts on the subject. He said I could, but only if I did so by means of a completely ridiculous literary device.