This was many years back, and it may be too much information, but I still think it’s a funny story. Sad to say, it’s not fiction 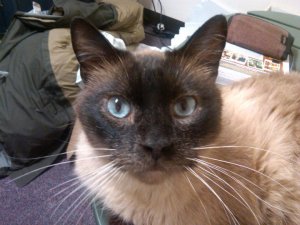 How low can you sink in life?

…and realizing it was damned near out.

My cats were there to help me of course, as they always are when I head to the bathroom, but neither Fido nor Junkmail had any special skill in toilet-paper assessment. They flittered about my feet a little while before sliding one by one out the door and leaving me to ponder this new dilemma all by myself.

Would it be enough?

And might I need more before the day was out?

I knew I was also out of napkins, because I had used a bit of toilet paper for a napkin the night before. Presumably, I didn’t have any paper towels either. I would certainly have used one of those at dinner, if it’d been available.

So much for the store bought stuff!

I wondered if a few extra napkins from a fast food joint might be tucked away in a coat pocket somewhere, or perhaps stuffed into a space near the computer. Could I have set one to the side while downing a burger?

But of course, getting through the crisis of the moment was one thing; living through the next couple days was another. I really didn’t want to spend the five dollars remaining in my wallet on a package of toilet paper. So, this was a tough call.

I thought perhaps I could walk over to the mall and use their toilet, but wow! That’s desperation. When you can’t afford your own toiletries, you know life hasn’t turned out the way you planned.

I supposed I could get a single roll at the store for a little over a dollar if I remembered the prices correctly. That would leave me with about 4 dollars for other things. I preferred to buy in bulk, but that was no longer an option, much less a preference. In toiletries too, the inefficiencies of poverty prevail, even for those of us with no valid excuses for being poor. I had long since lost count of the stupid mistakes that had put me in this situation.

There was nothing feigned about that little moment of self-contempt. I was pretty pissed at myself. How much worse can things get I wondered, as I reached for the roll? How much more pathetic?

In a blaze of black and cream-colored fur, Fido flew into the room, tackled the roll and tumbled into the far corner of the bathroom just out a little beyond the reach of my hand. His claws and teeth whirled furiously about for a second or two before he darted out the door just as quickly as he’d entered it.

And there I sat, my hand still extended, staring at the pile of shreds that had formerly been my last roll of toilet paper.