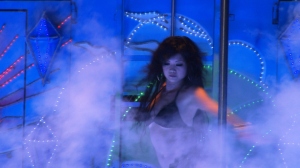 See this is what I love about anthropology!

It usually begins with one of those WTF moments when you first encounter something so bizarre that you have no context for it, no place in your world where it could possibly fit. If it was fiction, you’d tell the writer to come up with something more plausible. But it isn’t fiction. It’s actually part of someone’s life, a piece of their world. And that fact means you can learn more about it.

…which is when things get interesting.

The last time I was blessed to get one of those WTF moments occurred when DANCING FOR THE DEAD showed up in a random web search on my computer screen. This documentary, produced by Marc Moskowitz of the University of South Carolina, explores the practice of hiring funeral strippers in Taiwan.

Yes, you read that right.

And if the very thought of hiring a stripper for a funeral has you standing a little left of your own mind, then you had the same reaction I did. Which is exactly what makes the process of learning about this all that much more interesting. One wonders (or at least I did), in what social context would this sort of practice become a common occurrence?

At 38 minutes, the film itself only begins to sketch out the contours of an answer to that question. It doesn’t much dwell on the lurid details of stripping (and the film does not feature actual topless performers or full nudity). Instead, Moskowitz uses a variety of interviews in combination with documentary footage to illustrate the role that stripping has come to play in Taiwanese communities.

As it happens, these performers fit rather well into an elaborate set of public funeral practices, the purpose of which includes entertainment for the dead and some lesser deities as well as relatives of the deceased. The performance may also convey a sense of tribute to the virility of the departed. As with other public events, a successful funeral in Taiwan must achieve a certain quality of intensity. They have a word for it, ‘renau’, which is commonly translated as ‘hot and loud’.  Relatives thus employ funeral strippers as part of a larger public presentation meant to honor the departed by helping to make their send-off hot and loud.

The women dance on special trucks, known as Electric Flower Cars (EFCs), which travel with the funeral processions. The walls and ceilings of an AFC fold out to become elaborate stages which can be found at a range celebrations including religious processions. Electric Flower Car performers are especially popular during Ghost Month, a period when the spirits of the deceased are said to mingle with the living.

Funeral strippers are not without their critics in Taiwan, and Electric Flower Car performances have been subjected to troublesome legal restrictions. But of course the condemnation of EFCs carries a familiar double standard. With sex pervasive throughout the advertizing world (in Taiwan as well as America and virtually the entire global market), the EFCs have somehow crossed a line not fully explicable in terms of their own performances. 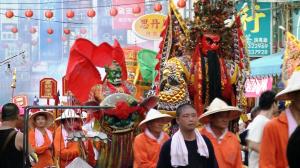 But that is a post for another day. For now, let me just say how happy I am to have stumbled across this little gem. I may not have met any of them, much less seen a live performance, but my mental landscape now includes a place for Electric Flower Car performers.

…and I can’t help but to think that my world is a richer place for their inclusion within it.

I have to admit this subject is a little out of my area, so I’m trying to give it a light touch. Moskowitz tells the story far better than I ever could, and his film is available on Amazon.com. So, if by some chance, you feel the need to know more, …well then, you know what to do.

Still photos are from the official website for the film. For those interested, a very interesting interview with Moskowitz may be found here.